Making Sense of Nuclear Negotiations with Iran: A Good Deal or a Bad Deal? 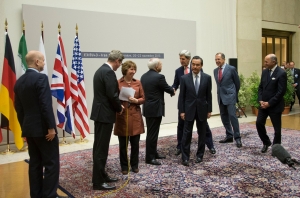 Negotiations between Iran and the P5+1 (US, UK, France, Russia, China, and Germany) have resulted in a first step agreement of a possible comprehensive deal on the Iranian nuclear program.

However, aspects of the deal have proved controversial, not only with U.S. allies such as Israel and Saudi Arabia, but with some members of the U.S. Congress as well.

Please join us as we hear from a panel of experts examining the negotiations, the potential for a deal that could effectively halt Iran's ability to develop a nuclear weapons capability, and implications for U.S. national security.

Daryl Kimball is executive director of the Arms Control Association and a recognized leader in the policy debate on weapons proliferation, nuclear arms control, and non-proliferation.

Paul Pillar is an adjunct senior fellow of the Center for Security Studies at Georgetown University who spent nearly three decades in the U.S. intelligence community in a variety of analytical and managerial positions with a focus on the Near East, Persian Gulf, and South Asia.