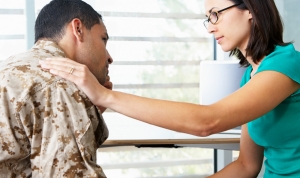 Since 2001, thousands of U.S. service members returning with disabling injuries or illnesses have required long-term support beyond what the formal health care system provides. Many of these injured or wounded service members or veterans rely on the support of caregivers — family or friends who provide unpaid care or help coordinate services for the wounded, ill, and injured.

While much has been written about the role of caregiving for other populations — like the elderly, chronically ill, or children with special needs — little is known about “military caregivers.” Military caregivers play an essential role in caring for injured or wounded service members and veterans. Yet playing this role can impose a substantial physical, emotional, and financial toll on caregivers. So, what challenges do today’s military caregivers face, and what can Congress and others do to support them?

Terri Tanielian and Rajeev Ramchand will present results from the RAND study on:

Tanielian was co-study director for RAND's seminal study Invisible Wounds of War: Psychological and Cognitive Injuries, Their Consequences, and Services to Assist Recovery (2008: RAND), the first non-governmental assessment of the psychological, emotional, and cognitive consequences of deployment to Iraq and Afghanistan. She also completed a congressionally mandated evaluation of a TRICARE demonstration to expand access to mental health counselors. In addition to co-leading Hidden Heroes, she leads several other RAND studies including the Deployment Life Study, a prospective longitudinal study of military families across the deployment cycle. She also leads a study examining community based models for expanding mental health care for returning veterans and their families under the Welcome Back Veterans Initiative.

Tanielian has published numerous peer-reviewed articles and serves as an associate editor for Psychiatric Services. She has served on many advisory committees related to veteran mental health policy. Tanielian has a M.A. in psychology from the American University.

Rajeev Ramchand is a senior behavioral scientist at the RAND Corporation. His research focuses the prevalence, prevention, and treatment of mental health and substance use disorders in adolescents, service members and veterans, and minority populations. He has specific interest in the epidemiology of suicide and its prevention, and was lead author of The War Within: Preventing Suicide in the U.S. Military (2011: RAND). He is interested in applying novel approaches in the collection and analysis of survey data and formerly served as associate director of the RAND Center for Military Health Policy Research.

In addition to co-leading Hidden Heroes, Ramchand is currently leading projects at RAND examining disparities in mental health conditions among minority subgroups in the U.S. military and evaluating the types and quality of services provided on suicide crisis hotlines in California. His research has been published in such journals as the American Journal of Public Health, Journal of Consulting and Clinical Psychology, AIDS and Behavior, The Journal of Trauma, and Journal of Traumatic Stress.

Ramchand received his B.A. in economics from the University of Chicago and his Ph.D. in psychiatric epidemiology from the Johns Hopkins Bloomberg School of Public Health.