Israeli, Saudi, and Iranian Responses in the Days After a Deal With Iran: What Are the U.S. Options? 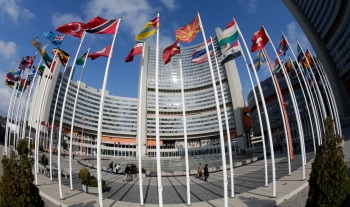 The United Nations headquarters building is pictured in Vienna where six world powers and Iran launched the decisive phase of diplomacy over Tehran's nuclear work on May 14, 2014

Israel, Saudi Arabia, and Iran itself hold the keys to the success and durability—or lack thereof—of any final nuclear deal reached between Iran and the P5+1.

Come learn the likely concerns and reactions of two key U.S. partners and the internal power dynamics and motivations of the Iranian government. Understanding these factors and U.S. options to address them will be critical for policymakers to implement a final nuclear agreement, as well as for broader regional stability in the months and years that follow.

Join us for a lively discussion regarding:

Alireza Nader is a senior international policy analyst at the RAND Corporation, a professor at the Pardee RAND Graduate School, and author of Iran After the Bomb (2013). His research has focused on Iran's political dynamics, elite decisionmaking, and Iranian foreign policy. His other RAND publications include Israel and Iran: A Dangerous Rivalry; The Next Supreme Leader: Succession in the Islamic Republic of Iran; Saudi-Iranian Relations Since the Fall of Saddam: Rivalry, Cooperation, and Implications for U.S. Policy; The Rise of the Pasdaran: Assessing the Domestic Roles of Iran's Islamic Revolutionary Guards Corps; and Mullahs, Guards, and Bonyads: An Exploration of Iranian Leadership Dynamics. His commentaries and articles have appeared in a variety of publications and he is widely cited by the U.S. and international media. Prior to joining RAND, Nader served as a research analyst at the Center for Naval Analyses. He is a native speaker of Farsi. Nader received his M.A. in international affairs from The George Washington University.

Dalia Dassa Kaye is the director of the Center for Middle East Public Policy and a senior political scientist at the RAND Corporation. In 2011-2012 she was a visiting professor and fellow at UCLA's International Institute and Burkle Center. Before joining RAND, Kaye served as a Council on Foreign Relations International Affairs Fellow at the Dutch Foreign Ministry. She also taught at the University of Amsterdam and was a visiting scholar at the Netherlands Institute of International Relations. From 1998 to 2003, Kaye was an assistant professor of political science and international affairs at The George Washington University. She is the recipient of many awards and fellowships, including a Brookings Institution research fellowship and The John W. Gardner Fellowship for Public Service. Kaye publishes widely on Middle East regional security issues, including in journals like Survival, Foreign Affairs, The Washington Quarterly, Foreign Policy, and Middle East Policy. She is author of Talking to the Enemy: Track Two Diplomacy in the Middle East and South Asia (RAND), Beyond the Handshake: Multilateral Cooperation in the Arab-Israeli Peace Process (Columbia University Press) and has co-authored a number of RAND monographs on a range of regional security issues. Kaye received her Ph.D. in political science from the University of California, Berkeley.

Jeffrey Martini is a Middle East analyst at the RAND Corporation, where he works on political reform in the Arab world with a specific focus on North Africa. Martini has published on civil-military relations in Egypt, generational divides within the Muslim Brotherhood, changes in the regional security environment, and prospects for democratization in the "Arab Spring" countries. He has spent four years living in the Arab world, including three as a Peace Corps volunteer in Morocco and one in Cairo, Egypt, where he was a 2007-08 fellow in the CASA Arabic language program. He speaks, reads, and writes modern standard Arabic and speaks Moroccan and Egyptian colloquial. Martini received his B.A. in political science and economics from Middlebury College and his M.A. in Arab studies from Georgetown University.

Lynn E. Davis is a senior political scientist at the RAND Corporation, and serves as director of RAND's Washington office. From 1993 to 1997, Davis served as Under Secretary of State for Arms Control and International Security Affairs. Her current research focuses on strategic planning, terrorism, citizen preparedness, and defense strategy and force structure issues. She was the senior study group advisor for the Commission on National Security/21st Century. Prior to joining the State Department, Davis was vice president and director of the RAND Arroyo Center. She has also served on the staffs of the Secretary of Defense, the National Security Council, and the first Senate Select Committee on Intelligence. She has taught in the Security Studies Program at Georgetown University, at the National War College, and at Columbia University. Davis's recent RAND publications include: Armed and Dangerous? UAVs and U.S. Security (Lynn E. Davis et al.,2014), U.S. Overseas Military Presence, What Are the Strategic Choices? (Lynn E. Davis et al., 2012), Iran's Nuclear Future: Critical U.S. Policy Choices (Lynn E. Davis et al., 2011). She earned her Ph.D. in political science from Columbia University.