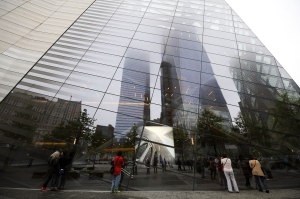 An image of one of the original WTC Towers displayed in the window of the 9/11 Memorial Museum pavilion during the dedication ceremony May 15, 2014

Should TRIA be reauthorized? Since the Terrorism Risk Insurance Act (TRIA) was last reauthorized in 2007, terrorism insurance has remained widely available and the price has fallen. But underlying economic and insurance challenges remain. With the program set to expire at the end of December, it's unclear whether the improvements in the market that we have seen since TRIA was first passed in 2002 can be sustained without TRIA.

To inform the debate on whether TRIA should be reauthorized, modified, or allowed to expire, RAND invites you to a briefing where experts will present the findings of their recent work on this topic and address different facets of this complex issue, including the pros and cons of proposed TRIA modifications.

Lloyd Dixon is director of the RAND Center for Catastrophic Risk Management and Compensation and a senior economist at the RAND Corporation. His expertise includes insurance, compensation, and liability issues. He has led studies addressing terrorism, wind, flood, earthquake, and workers' compensation insurance markets. Following the September 11th terrorist attacks, he also described and assessed the complex web of insurance, charity, government, and tort payments that provided assistance to individuals and businesses harmed in the attacks. Dixon received his Ph.D. in economics from the University of California, Berkeley.

Michael Dworsky is an associate economist at the RAND Corporation. His primary research interests are disability policy, health economics, labor economics, and the economics of insurance. His current research uses administrative data from Chile to estimate how sickness insurance claiming behavior responds to the threat of claim rejections and whether these behavioral responses differ across health conditions. He is also studying the post-injury job transitions of workers' compensation claimants in order to learn how health contributes to labor productivity. Dworsky received his Ph.D. in economics from Stanford University.

Henry H. Willis is director of the RAND Homeland Security and Defense Center and a professor at the Pardee RAND Graduate School. He has applied risk analysis tools to resource allocation and risk management decisions in the areas of public health and emergency preparedness, homeland and national security policy, energy and environmental policy, and transportation planning. He is the author of dozens of publications, book chapters, and op-ed pieces and has testified before Congress as an expert on applying risk analysis to homeland security policy. Willis's recent research has involved assessing the costs and benefits of terrorism security measures like the Western Hemisphere Travel Initiative and evaluating the impact of public health emergency preparedness grant programs like the Cities Readiness Initiative. Willis earned his Ph.D. from the Department of Engineering and Public Policy at Carnegie Mellon University.