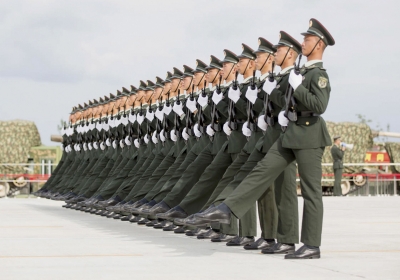 Over the past two decades, China has poured resources into upgrading its military. This modernization, coupled with China's increasingly assertive position in the waters surrounding the mainland, has caused concern in Washington and capitals across Asia. Should a conflict break out, how would U.S. military assets stack up against their Chinese counterparts? What can policymakers do to improve the resilience and response of U.S. forces in the Pacific?

Recently, a team of RAND researchers led by Eric Heginbotham released The U.S.-China Military Scorecard report. This study is the broadest and most rigorous assessment to date of relative U.S. and Chinese military capabilities based entirely on unclassified sources. This research shows how China and the United States would perform relative to each other in various conflict scenarios and how that performance is evolving over time. To be clear, the goal is to avoid war, which the authors do not anticipate and which would be disastrous for both China and the United States.

Please join us on October 5th as Heginbotham discusses:

Eric Heginbotham is a senior political scientist at the RAND Corporation specializing in East Asian security issues. He has recently led RAND projects assessing U.S. engagement opportunities and challenges in Southeast Asia and on U.S. and Chinese relative military capabilities.

Before joining RAND in 2005, Heginbotham was a senior fellow of Asia studies at the Council on Foreign Relations. He taught as a visiting faculty member of Boston College's Political Science Department and served for 16 years in the U.S. Army Reserves and National Guard. He is fluent in Japanese and Chinese. Heginbotham received his B.A. from Swarthmore College and his Ph.D. from the Massachusetts Institute of Technology.