Lessening the Risk of Refugee Radicalization 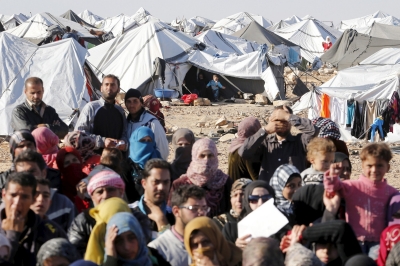 Syrian refugees, stuck between the Jordanian and Syrian borders, wait to cross into Jordan near the town of Ruwaished

Over 4.5 million Syrians have fled the region since the civil war began. Just over 2,000 have been taken in by the United States and thousands more have been recommended for admission through United Nations programs.

Many people fear that refugees will radicalize and supply militants to groups like ISIS as well as plan attacks in the United States—but historical cases show that is not inevitable. How does radicalization happen within refugee groups? What are the contributing factors, and how can the U.S. government work to mitigate these factors and safeguard the homeland?

Following the briefing, John V. Parachini, senior international policy analyst and director of the Intelligence Policy Center at the RAND Corporation, joined Barbara to respond to questions from the audience.

Barbara H. Sude is a senior political scientist at the RAND Corporation. She joined RAND after more than 30 years with the U.S. Government, where she specialized in analysis of Sub-Saharan Africa, the Middle East, and counterterrorism. Sude received her B.S. in Arabic studies from Georgetown University and her Ph.D. in Near Eastern studies with a concentration in Islamic intellectual history from Princeton University.

John V. Parachini is a senior international policy analyst and director of the Intelligence Policy Center at the RAND Corporation. Previously, Parachini served as the executive director of the Washington office of the Monterey Institute of International Studies' Center for Nonproliferation Studies. He holds a B.A. in philosophy from Haverford College; an M.A. in international relations from the Paul H. Nitze School of Advanced International Studies, Johns Hopkins University; and an M.B.A. from Georgetown University.