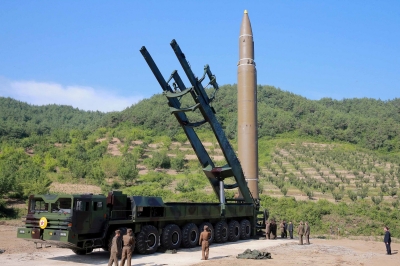 North Korea's continuous provocative behavior has heightened tensions on the Korean Peninsula and caused alarm throughout Northeast Asia and beyond. Most recently, Pyongyang sent a signal to Washington by launching a missile on the U.S. Independence Day holiday that appears to have been an intercontinental ballistic missile (ICBM) capable of reaching Alaska but not the contiguous United States.

This provocation is the latest in a string of destabilizing actions that include missile tests, the development of nuclear weapons, and the assassination in Malaysia of Kim Jong-un's older half-brother, Kim Jong-nam. The seriousness of North Korea's bad behavior was summed up by Secretary of Defense James Mattis when he testified before the House Armed Services Committee that North Korea was "the most urgent and dangerous threat to peace and security."

In this briefing, RAND researcher Bruce Bennett will discuss

Bruce Bennett is a senior international/defense researcher at the RAND Corporation who works primarily on research topics such as strategy, force planning, and counterproliferation. He is an expert in Northeast Asian military issues, having visited the region more than 100 times and written much about Korean security issues.

His Northeast Asian research has addressed issues such as future South Korean military force requirements, the Korean military balance, counters to North Korean chemical and biological weapon threats in Korea and Japan, dealing with a North Korean collapse, potential Chinese intervention in Korean contingencies, changes in the Northeast Asia security environment, and deterrence of nuclear threats (including strengthening the U.S. nuclear umbrella). He has worked with the Office of the Secretary of Defense, the Defense Threat Reduction Agency, U.S. Forces Korea and Japan, the U.S. Pacific Command and Central Command, the South Korean and Japanese militaries, and the South Korean National Assembly.