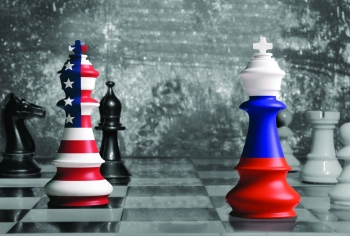 Russia continues to be a top national security focus for Congress, which has held hearings and crafted legislation to address Moscow’s destabilizing activities. While Russia’s use of information warfare and its conventional military arsenal make it a formidable opponent, the state also has significant weaknesses that could be exploited. An important question for Congress is, what policies could the United States adopt to stress Russia’s military, its economy, or the regime’s political standing at home and abroad?

Please join us as former Ambassador James Dobbins, Raphael Cohen, and Howard Shatz discuss findings from their report, including:

James Dobbins is a senior fellow and distinguished chair in Diplomacy and Security at the RAND Corporation. He has held State Department and White House posts including Assistant Secretary of State for Europe, Special Assistant to the President for the Western Hemisphere, Special Adviser to the President and Secretary of State for the Balkans, and Ambassador to the European Community. In 2013, he served as the Obama Administration's Special Representative for Afghanistan and Pakistan.

Raphael Cohen is the associate director of RAND’s Project Air Force’s Strategy and Doctrine Program. He works on a broad range of defense and foreign policy issues, including defense strategy and force planning, Middle East and European security, and civil-military relations. In 2018, he served as a staffer on the Congressionally-created National Defense Strategy Commission. Cohen also serves as a lieutenant colonel in the Army Reserve and is an adjunct professor of Security Studies in Georgetown University's School of Foreign Service.

Howard J. Shatz is a senior economist at the RAND Corporation. He specializes in international economics and economics and national security. From 2007 to 2008, he was on leave from RAND, serving as a senior economist at the U.S. President's Council of Economic Advisers. Shatz has held research fellowships at the Brookings Institution and the Board of Governors of the Federal Reserve and has worked as a consultant to the World Bank.