Preparing for the Future of Fentanyl: Considerations for Congress in Tackling the Synthetic Opioid Crisis 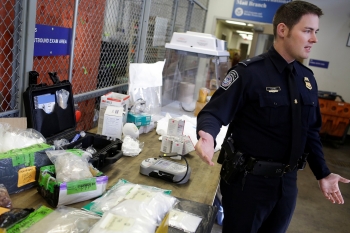 The rates of overdose fatalities involving heroin or prescription opioids have slowed in recent years but are now outnumbered by overdoses involving synthetic opioids. The introduction of illicitly manufactured synthetic opioids like fentanyl to U.S. drug markets has presented new challenges for policymakers working to reverse this public health crisis. What do policymakers need to consider in their efforts to address this threat in the United States?

RAND researchers recently analyzed the past, present, and possible futures of fentanyl in the United States. In this briefing, Bryce Pardo, Associate Policy Researcher, and Beau Kilmer, Director of the Drug Policy Research Center, will discuss:

Bryce Pardo is an associate policy researcher at the RAND Corporation. His research focuses on drug policy with a particular interest in the areas of cannabis regulation, opioid control, and new psychoactive substance markets. His recent work has involved analyzing trends related to synthetic opioid supply and use and China’s role in the production and supply of synthetic opioids. Pardo earned his Ph.D. in public policy from the University of Maryland.

Beau Kilmer is a senior policy researcher and director of the Drug Policy Research Center at the RAND Corporation. His research lies at the intersection of public health and public safety, with special emphasis on crime control, substance use, illicit markets, and public policy. Some of his current projects include analyzing the consequences of cannabis legalization; measuring the effect of 24/7 Sobriety programs on DUI, domestic violence, and mortality; and assessing the evidence and arguments made about implementing heroin-assisted treatment and supervised consumption sites in the United States. Kilmer earned his Ph.D. in public policy from Harvard University.