“T” Is for Technology FAQ 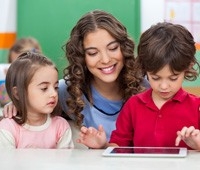 The role of information and communication technology in early childhood education (ECE) settings is always evolving. Experts continue to conduct more research in this area, policymakers and educators will pursue different ways of integrating technology into ECE, and new devices and applications will enter the marketplace.

At the time of this study, RAND experts unpacked some of the most pressing questions surrounding the issue.