COVID-19 Vaccine Liability and Compensation in the United States 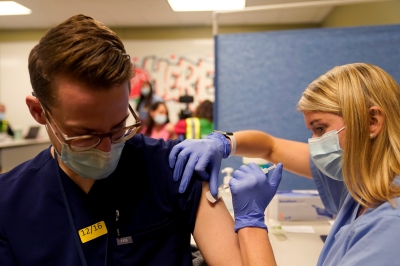 The U.S. is working quickly to advance a comprehensive vaccine campaign to stop the spread of COVID-19. Speed is crucial given concerns that current vaccines may not be as effective against new variants that emerge over time. Yet, recent polls suggest that one-third of Americans are still skeptical or unwilling to take a COVID-19 vaccine for fear they may suffer an adverse reaction.

Although serious vaccine injuries are very rare, the U.S. has two federal compensation systems for people who have been harmed by vaccines: the Countermeasures Injury Compensation Program (CICP) and the National Vaccine Injury Compensation Program (VICP). COVID-19 vaccine claims will be handled by the CICP, and the level of benefits provided by that system and the speed which with claims are processed could impact the willingness of some Americans to roll up their sleeves.

The RAND Institute for Civil Justice (ICJ) and the RAND Kenneth R. Feinberg Center for Catastrophic Risk Management and Compensation (Feinberg Center) invite you to a webinar to discuss how those who believe they are injured by COVID-19 vaccines in the U.S. can seek compensation for medical costs, work time, and other losses. The discussion will include an overview of the differences between the CICP and VICP systems and the implications for fairness and vaccine uptake.

Lloyd Dixon is a senior economist at the RAND Corporation and Director of RAND’s Kenneth R. Feinberg Center for Catastrophic Risk Management and Compensation. He has expertise on insurance, compensation, and liability issues. For California’s Fourth Climate Change Assessment, he investigated the impact of changing wildfire risk on California’s residential insurance market. He has examined the prevalence of flood insurance across the country and, following Hurricane Sandy, assessed the costs and benefits of a flood insurance affordability program for New York City. He recently completed a study characterizing the risk management practices of state and local government and their implications for FEMA’s Public Assistance program. He is currently analyzing options for a federally backed pandemic risk insurance program.

Dixon has examined compensation and liability policies in a number of different settings. Following the September 11th terrorist attacks, he described and evaluated the complex web of insurance, charity, government, and tort payments that provided assistance to individuals and businesses harmed in the attacks. He has examined the incentives potentially responses parties have to provide assistance in the immediate aftermath of a disaster and is currently investigating the impact of compensation funds on post-disaster litigation.

Dixon holds a B.S. in engineering and a B.A. in political science from Stanford University and a Ph.D. in economics from the University of California at Berkeley.

Kenneth R. Feinberg is one of the nation's leading experts in alternative dispute resolution, having served as Special Master of the 9/11 Victim Compensation Fund, the Department of Justice Victims of State-Sponsored Terrorism Fund, the Department of the Treasury’s TARP Executive Compensation Program and the Treasury’s Private Multiemployer Pension Reform program. He was also Special Settlement Master of the Agent Orange Victim Compensation Program. In 2010, Mr. Feinberg was appointed by the Obama Administration to oversee compensation of victims of the BP oil spill in the Gulf of Mexico.

Most recently, he has served as Administrator of the New York State Dioceses’ Independent Reconciliation and Compensation Funds, the One Orlando Fund, the GM Ignition Switch Compensation Program, and One Fund Boston Compensation Program arising out of the Boston Marathon bombings. He is currently the Court-appointed Settlement Master in the Fiat/Chrysler Diesel Emissions class action litigation in San Francisco. He has been appointed mediator and arbitrator in thousands of complex disputes over the past 35 years.

Overby is a graduate of Trinity College with a Bachelor of Arts degree in Economics, and the American University with a Master of Business Administration in Human Resources Management.

Nicholas M. Pace (J.D.) is a senior social scientist at the RAND Corporation. He has contributed his expertise in justice system organization-related research methodologies to numerous projects involving the law, the courts, and judicial decisionmaking, often involving large scale, groundbreaking qualitative and quantitative data collections. He recently led studies that have included an examination of the process by which petitions for Presidential pardons are evaluated by the Department of Justice, the setting of maximum caseload limits for publicly-funded defense counsel in state courts, an analysis of attorney time expenditures for Federal public defenders, and an examination of issues related to the use of alternative compensation systems following a catastrophe.

Other work has included exploring ways to reduce costs associated with pretrial discovery of digital information, helping to conduct a national survey of organizations providing services to victims of crime, describing the dynamics of class action litigation, describing transparency issues related to class action settlements, examining the impact of statutory reforms on costs and outcomes in medical malpractice cases, and leading a comprehensive study of the workers’ compensation courts in California. He has also helped to accomplish an in-depth evaluation of the Civil Justice Reform Act of 1990 and its effects on judicial case management, cost, and delay in Federal district courts; analyzed jury verdict outcomes; and helped develop national standards related to the electronic filing of pleadings and other legal documents in courts of law. Currently he is leading work related to setting caseload limits for public defenders in additional state courts, a national survey of corporate counsel regarding the use of business-to-business arbitration agreements, and a major survey of adult Americans to better understand how the civil justice system is utilized in the immediate aftermath of injuries and illnesses.

Paul D. Rheingold, from the Law Office of Paul D. Rheingold, PC has practiced on the plaintiff’s side of personal injury cases since graduation, and in recent years has specialized in mass tort litigation. He is the author of the two-volume work, Litigating Mass Tort Cases (Thomson West 2006). He has been active on steering committees for such products as Benicar, NuvaRing, ephedra, and fen phen. He has taught at Harvard Law School and Stanford Law School, among others. In addition to his work with the ICJ Board of Advisors, he was a member of the Committee on Science, Technology and Law of the National Academy of Science.

Register for this Program