Molly and Mike Landi's history with RAND dates back more than 40 years. They met when she was a librarian in the Washington office, and he was an up-and-coming researcher and new program director. Their $1 million bequest to RAND will endow a special fund for national security research.

Molly and Mike Landi recently announced a $1 million bequest for RAND to endow a special fund for national security research. It was, Mike Landi said, “just a natural thing for us to do.”

Their history with RAND dates back more than 40 years. They met when she was a librarian in the Washington office, and he was an up-and-coming researcher and new program director. Now retired and living a quiet life in northern Michigan, they saw their bequest as a way to give back.

“We like what RAND does and what it stands for,” Mike Landi said. “We were looking for a place that would make good use of the funds. That's how we settled on RAND.”

The Landis' pledge places them in a small but growing circle of donors who have included RAND in their estate plans, the Legacy Society. It's an often-overlooked option for people who want to support RAND, and an important one. Recent legacy gifts have helped fund research on topics ranging from sustainability to criminal justice, as well as the Pardee RAND Graduate School.

Mike Landi worked as a logistics researcher at RAND in the late 1960s and early 1970s. He was part of a team that helped New York City's airports plan for the future. His work so impressed city officials that they brought him on as an assistant budget director during a funding crisis in the early 1970s; and then as an assistant police commissioner during the corruption scandal exposed by then-Det. Frank Serpico. “It's been very interesting,” Landi said, and left it at that.

“We like what RAND does and what it stands for. We were looking for a place that would make good use of the funds.”

He came back to RAND in 1973 as the director of a program focused on NATO and European affairs. A few years later, he became the vice president for national security research, a position he held for eight years. He was the lead author of a report urging Washington and Moscow to establish better lines of communication than a single hotline in case of a nuclear crisis.

He met Molly during a visit to RAND's Washington office. She had been hired to reorganize the library there, but also acted as a frequent liaison with federal agencies and the Pentagon. After they married, and she joined Mike in Southern California, she became the administrator of one of the largest law offices in Los Angeles.

They finished out their careers in Buffalo, New York, where Mike served as a vice president at the State University of New York at Buffalo, and Molly worked for a time at a local law office.

In recent years, retired, living in a small town in Michigan that gets snowed in every winter, they started planning their estate, and wrote RAND in as one beneficiary. “I loved RAND,” Molly said. “I loved what they did, I loved the energy. I hope (the bequest) helps RAND continue to do wonderful research into areas that need to be thought about, where alternatives need to be found.”

Their bequest will create the Molly and Dale M. Landi Endowed Fund for National Security Research. Its purpose, Mike Landi said, will be to support “some creative work to help the country.”

“Think about what this institution does and what it contributes to the country,” he said in explaining their decision to include RAND in their estate plans. “We hope this enables RAND to fund creative research that doesn't have a sponsor yet but where there's some good work that should be done.”

For more information about legacy giving at RAND, go to giftlegacy.rand.org, or contact Brandon Baker, Vice President of Development, at Brandon_Baker@rand.org. 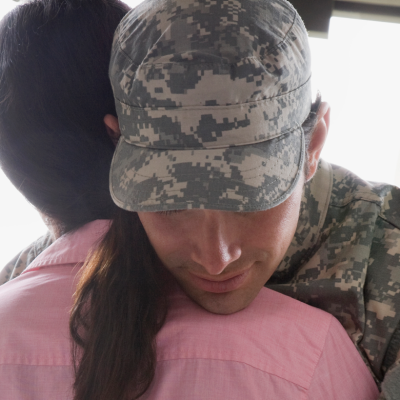 The United States has seen an increase in suicide among military personnel who served in Afghanistan and Iraq. Donor funds helped RAND become an early, insistent voice in documenting the needs of today's service members. Our work continues to inspire action across the U.S. military. Join us.