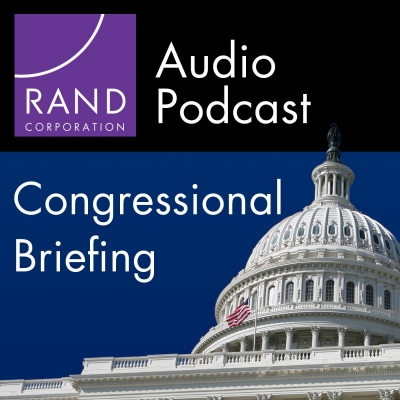 Subscribe to automatic updates of this podcast by using one of the links below. Clicking on the Apple Podcasts link will open the Apple Podcasts Preview website where you can listen and subscribe. To use another podcast application or feed reader, right click on the XML link on the left, select "Copy Link", and paste the link into the podcast application or feed reader of your choice.

For more than 60 years, RAND has provided policymakers with independent, objective research and analysis on key national security, domestic, and international issues. RAND work helps members of Congress and their staffs make better-informed decisions on the nation's pressing challenges. The Office of Congressional Relations offers a number of products and services to educate, inform, and facilitate congressional policymakers' access to RAND work, including coordinating congressional testimony by RAND experts, organizing briefings and meetings, synthesizing RAND work into topical e-newsletters and providing reports and publications to congressional offices. For more information, visit the Office of Congressional Relations Web page, contact ocr@rand.org, or call (703) 413-1100 x5395.