Dr. Thomas Schelling, recipient of the 2005 Nobel Prize in economics, had a nearly 50-year affiliation with RAND, including one year as a staff economist in the late 1950s. He received the prize "for having enhanced our understanding of conflict and cooperation through game-theory analysis" — analysis that was conducted in part while at RAND.

As the Royal Swedish Academy of Sciences noted in announcing the prizewinners, "Against the backdrop of the nuclear arms race in the late 1950s, Thomas Schelling's book The Strategy of Conflict set forth his vision of game theory as a unifying framework for the social sciences. Schelling showed that a party can strengthen its position by overtly worsening its own options, that the capability to retaliate can be more useful than the ability to resist an attack, and that uncertain retaliation is more credible and more efficient than certain retaliation. These insights have proven to be of great relevance for conflict resolution and efforts to avoid war."

The Academy continued, "Schelling's work prompted new developments in game theory and accelerated its use and application throughout the social sciences. Notably, his analysis of strategic commitments has explained a wide range of phenomena, from the competitive strategies of firms to the delegation of political decision power."

He has been elected to the National Academy of Sciences, the Institute of Medicine, and the American Academy of Arts and Sciences. In 1991 he was President of the American Economic Association, of which he is a Distinguished Fellow. Previous honors include the Frank E. Seidman Distinguished Award in Political Economy and the National Academy of Sciences award for Behavioral Research Relevant to the Prevention of Nuclear War.

Schelling served in the Economic Cooperation Administration in Europe during the period of the Marshall Plan and also held positions in the White House and Executive Office of the President. He has published on military strategy and arms control, energy and environmental policy, climate change, nuclear proliferation, terrorism, organized crime, foreign aid and international trade, conflict and bargaining theory, racial segregation and integration, the military draft, health policy, tobacco and drugs policy, and ethical issues in public policy and in business.

Schelling's co-laureate, Robert J. Aumann, was also an adjunct researcher at RAND for a dozen years, from 1962 to 1974. He was the first to analyze "infinitely repeated games", which helped explain why some people or communities cooperate better than others over time and co-authored several RAND papers on "non-atomic games."

Request a RAND Speaker for Your Event 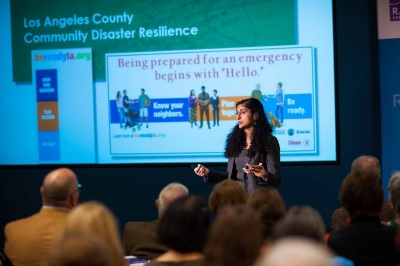 Committed to improving public policy, RAND experts share their research findings at hundreds of meetings and events each year. Working across a broad range of timely issue areas, they can bring knowledge, experience, and depth to any policy discussion.