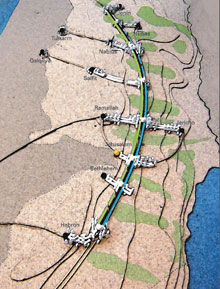 Aerial view of the Arc, RAND's proposal for a sweeping infrastructure corridor linking urban centers within and between the West Bank and Gaza

The Arc, a proposed high-speed transportation infrastructure corridor linking urban centers within and between the West Bank and Gaza, won two major prizes at the 2010 World Architecture Festival held in Barcelona November 3-5, 2010. The Arc was awarded first place in the "Future Projects: Masterplanning" category. Subsequently, the Arc was also named Future Project of the Year, that is, best among all the future projects presented at the Festival.

Designed by Suisman Urban Design in partnership with the RAND Corporation, the Arc was called "a stunning vision of infrastructure for a future Palestinian state" by the Swedish magazine Arkitektur. Festival judges concluded that "The Arc excels in translating a complex context into a clear and powerful diagram....it is rigorous, practical, and believable...an example of architecture and masterplanning helping to promote a political solution."