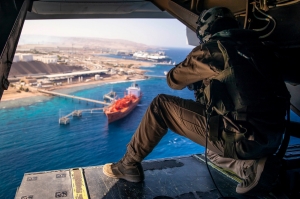 On October 8th, 2019, the RAND National Security Research Division (NSRD) hosted a workshop on the future of irregular warfare for Deputy Assistant Secretary of Defense (DASD) for the Middle East, Michael Mulroy. DASD Mulroy has been on the cutting edge of irregular warfare operations for over two decades. The workshop convened at RAND's Arlington, Virginia office.

The discussion centered on the Irregular Warfare Annex to the 2018 National Defense Strategy. The annex was signed by then-Acting Secretary of Defense Michael P. Shanahan in early 2019. DASD Mulroy also led discussion on the current crises in the Middle East.

Workshop participants included DASD Mulroy and former Undersecretary of Defense for Policy, Christine Wormuth, who is the current Director of NSRD's International Security and Defense Policy Program. Also in attendance were Frank Hoffman from the National Defense University (NDU); David Kilcullen, Director of the Combating Terrorism & Irregular Warfare Center at NDU; RAND colleagues Linda Robinson, Howard Shatz, and Ben Connable; and several members of the media for an off-the-record session.

An approved statement by the DASD on the annex, and on the current situation in the Middle East, follows.

The Irregular Warfare Annex is a critical component of our National Defense Strategy and in turn, of great power competition. While irregular warfare (IW) has traditionally been perceived as a predominately counterterrorism (CT) effort used to fight violent extremist organizations, global and regional powers, as well as their proxies, are becoming reliant on IW to provoke the United States. The Department of Defense, as well as the U.S. interagency, must be prepared to respond with "aggressive, dynamic, and unorthodox approaches to IW," as the Annex states.

In order to institutionalize DoD's vision of IW and the role it plays in implementing the National Defense Strategy (NDS), DoD will proactively "incorporate IW into its policies, strategies, plans, and institutional processes;" this applies across the Joint Force, not solely Special Operations Forces. Supporting lines of effort include considering IW in force design and development, our approach to human capital, and ensuring IW efforts are flexible, cost-informed, and resource efficient. Operationally speaking, DoD seeks to proactively manage and determine the character, scope, and intensity of our competition with adversaries in the IW environment, lending us a competitive advantage and raising the cost of adversaries escalating dynamics. Furthermore, it is imperative that we work by, with, and through allies and partners in these efforts, as this strengthens partner countries' commitment to common security objectives and increases their abilities to defend their own sovereignty as well.

In my previous organization, I spent much of my time engaging in unconventional conflict around the world, and in my current role as the Deputy Assistant Secretary of Defense for the Middle East, this topic continues to be important to our efforts in the region. It is in this space that we are looking to compete with nation-states that have elected to use IW themselves and who seek to avoid direct confrontation with the United States.

While the United States, allies, and partners spent the past two decades honing our counterterrorism (CT) capabilities, multiple state actors, including Iran, also refined their expertise in IW. Because the United States maintains a significant conventional military overmatch, competitors often choose activities they believe fall below the level of direct confrontation. In the case of Iran, this includes attempts to conduct low-attributable attacks on partners in the region and the provision of lethal aid to surrogates across the region.

Iran utilizes, principally through the Islamic Revolutionary Guard Corps - Qods Force, an economy of force and capital model that prioritizes relatively low-cost operations, understanding and leveraging the human domain, and relying on proxy forces to impose disproportionately high costs upon the United States. Indeed, in an October 2 speech to a group of IRGC officers, Supreme Leader Khamenei declared that "the more our enemies spend, the more they lose," citing $7 trillion the United States has spent in the region fighting ISIL. We can do much more to combat this strategy by calibrating our responses and levying a counter-cost imposition strategy against Iran, whose pockets are much shallower than ours. This will involve economizing our force allocation and operations to deny Iran strategic success.

This is not a new concept; there are plenty of examples we can draw upon to refine our irregular warfare capabilities. The United States used both conventional and Special Operations forces in irregular warfare campaigns around the world against the U.S.S.R. during the Cold War. Russia published its own version of irregular warfare under the Gerasimov Doctrine, which it is executing in Ukraine and Syria. Iran has seen success throughout the Middle East, principally in Iraq, Syria, Lebanon, and Yemen.

GEN (Ret.) Votel, in describing what we term irregular warfare as "Gray Zone" conflict, has correctly asserted that Special Operations Forces (SOF) are particularly attuned to be successful in this space; however, the small size and large number of mission requirements limits the ability of U.S., allied, and partner SOF to continue current CT activities while taking on more and more IW responsibilities. This fact necessitates including conventional forces in our IW efforts, transferring tasks that these units can execute without large shifts in operational focus. These conventional units are already suited to conduct many of the irregular warfare tasks the Department will require of them.

We must also include our allies and partners in this expansion of irregular warfare capabilities enabling the United States to compete with priority state actors as named in the NDS while avoiding conventional conflict. These allies and partners have gained critical experience fighting alongside us in our counterterrorism campaigns since 2001. We want to leverage that experience and find ways that we can cooperate to better achieve our shared national security objectives. Our military strength and broader strength as a nation would not be possible without these allies and partners, and they must be involved in our efforts if we are to be successful in ensuring the survival of the rules-based international order.

These actions, coupled with robust diplomacy and stabilization actions, can act as an impediment and competitive set of actions against Iran. Strengthening our work with allies and partners and applying calibrated military action (both in the conventional and irregular space) provide flexible options to our decision makers when faced with aggression and instability. As one of the primary stabilizing forces in the Middle East, we can apply ourselves to reducing those malign activities, while providing space to our diplomats to obtain a new and better deal with Iran.

Yemen also presents an important case study of IW in the Middle East.

The U.S. remains committed to our primary objective in Yemen: debilitating Al Qaeda in the Arabian Peninsula and ISIS in Yemen. However, our counterterrorism objectives are challenged by the ongoing civil war, coming up on its sixth year, and the external actors who continue to disrupt Yemen.

The Iranian-backed Houthis enable Tehran's foothold in Yemen. While we can be cautiously optimistic about the Saudi-led Coalition's recently renewed dialogue with Houthi leadership, the latter continues to benefit from Iranian support and a sustained wartime economy, thereby making the Houthis' prosperity an inherent roadblock to the UN-led peace process.

This is but one instance of Iran's hand in the behavior of the Houthis. The Houthis have taken control of key institutions in the Republic of Yemen Government, and overtaken towns and critical ports that allow them to benefit from theft and taxation of imported goods, including humanitarian aid. Houthi forces use such outposts to proactively surge forces to areas anticipating attack, and not to be understated, maintain an effective information operations capability thanks to control of the telecommunications infrastructure.

The reality of irregular warfare cannot be ignored in conflict areas such as Yemen, and neither can the Yemeni way of life. Understanding the actors includes understanding Yemenis, characterized by a deep-rooted tribal culture that includes an irreversible smuggling trade. Through our light counterterrorism footprint in Yemen and coordination with our partners on the ground, the U.S. continues to learn not just the ways of AQAP and ISIS in Yemen, but also that of the Houthis. I learned in my past life that integrating yourself with a state to understand its people was key to operating within irregular warfare.

There is no military solution to the conflict in Yemen, but the irregular warfare practiced by the terrorist organizations in Yemen and the IRGC-trained Houthis cannot be disregarded as a roadblock to ending the war and putting Yemen back on the road to peace and stability. The sustained conflict has created a power vacuum that we cannot stand by and allow radical actors to continue to exploit. We should instead seek to stabilize Yemen by using key partner gains, military, political, and otherwise, to transform success into lasting military gain.

RAND has played a critical role in working with the UN to define near and long-term objectives in the humanitarian, political, economic, and security realms, so that if and when there is a clear turning point in the conflict, the international community can turn to a concrete way ahead.

To that end, our colleagues in SOLIC have spearheaded legislation that, if passed in the NDAA, will give DoD the authorities to kick-start State and USAID-run stabilization initiatives in otherwise unreachable areas. Alone, these agencies cannot begin stabilizing a country at key inflection points in a conflict, because they do not have the necessary security to get there. This authority would be a small step towards enabling our interagency colleagues to quickly fill the gap before our adversaries can seize a power vacuum, be it AQAP, ISIS, or Iran.

I greatly admire RAND's dedicated work in the irregular warfare and stabilization space, without which we would not have the bandwidth or experience to put our visions into action for the UN and other international entities operating in conflict areas across the world.