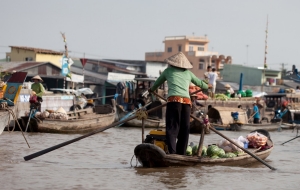 In this World Bank-sponsored project, RAND researchers worked with the HCMC Steering Committee for Flood Control (SCFC) to use robust decision making (RDM) to develop long-term flood defenses that will be robust to these uncertainties. RAND researchers traveled to HCMC and met with key stakeholders including the SCFC and local World Bank officers in order to understand the city’s flood concerns, existing infrastructure, and current planning efforts, as well as to present RDM.

RAND developed a design of the analysis of vulnerabilities, adapted the SCFC's models for this analysis, identified vulnerabilities, and evaluated adaptation options to develop a robust, iterative risk management plan. Researchers also presented their findings and recommendations at a workshop in HCMC.