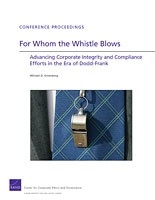 For Whom the Whistle Blows

The Dodd-Frank Wall Street Reform and Consumer Protection Act, signed into law in July 2010, includes a new mechanism for offering financial awards to internal corporate "whistleblowers" who report instances of fraud to the U.S. Securities and Exchange Commission (SEC). Final whistleblower rules enacted by the SEC under the statute have been controversial, particularly in neglecting to require that corporate insiders make use internal corporate reporting channels as a prerequisite to eligibility for any subsequent bounty under Dodd-Frank. On May 11, 2011, RAND convened thought leaders and stakeholders from the government, industry, academic, and nonprofit sectors to discuss the potential impact of the Dodd-Frank whistleblower rules on corporations, the importance of internal compliance and reporting processes both for corporations and the regulatory community, and steps that might be taken to strengthen internal compliance and reporting in the era of Dodd-Frank. These proceedings summarize key issues and topics from the symposium and identify major points of agreement and disagreement among the participants. The proceedings also feature three invited papers presented at the symposium.

This report was funded with pooled resources from the RAND Center for Corporate Ethics and Governance, which is part of the RAND Institute for Civil Justice, a unit of the RAND Corporation.