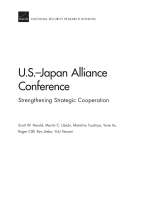 Defending the U.S. and Japanese homelands, protecting and maintaining a safe and secure online environment, and ensuring that territorial and maritime disputes are resolved peacefully in an orderly process free from coercion represent some of the most important aims of the U.S.–Japan alliance. In 2015, Washington and Tokyo issued new defense guidelines to guide their security cooperation in support of these goals. The new guidelines expanded the areas of applicability of the alliance to include threats not limited to situations in areas surrounding Japan (SIAS-J), thus going beyond a limit that appeared in the 1997 U.S.–Japan Revised Defense Guidelines. The new guidelines also expand allied defense cooperation to include the increasingly important domains of space and cyberspace. To better understand the rapidly changing and deepening cooperation between the United States and Japan, as well as the prospects for the future evolution of their partnership (including with regional states in South and Southeast Asia, as well as Oceania), the RAND Corporation commissioned a series of papers by leading experts and hosted a two-day conference in Santa Monica, California, in March 2016. The findings of those efforts illuminate important options for continuing to tighten alliance cooperation and suggest prospective pathways forward as the two countries look to respond collectively to the rise of China, a more aggressive Russia, and an increasingly risk-acceptant and provocative North Korea.

This research was sponsored by the Government of Japan and conducted within the International Security and Defense Policy Center of the RAND National Security Research Division (NSRD).