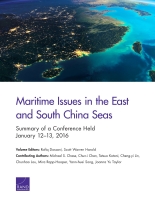 Maritime Issues in the East and South China Seas

In January 2016, the RAND Corporation's Center for Asia Pacific Policy organized a conference on maritime disputes in the East and South China Seas. Participants discussed disputes stemming from rising nationalism and competition for natural resources, resulting in challenges to established power structures. As China's regional presence has increased, smaller nations have built coalitions with powerful states (such as the United States) and among themselves. In addition, competition for fish and hydrocarbon resources has made territorial resolution difficult to achieve. Although future trajectories seem to suggest increased confrontation over the East and South China Seas, several contributors to these proceedings offered ideas that individually or in combination might improve the prospects for negotiated settlements. The common theme of these ideas is to focus on economic collaboration with the hope that economic interdependence will set the stage for settling territorial disputes down the road.

The conference and this resulting summary were conducted through the RAND Center for Asia Pacific Policy, which is part of International Programs at the RAND Corporation.