As a central locus of the competition between Russia and the West for the future of Europe, the Black Sea region raises several critical questions: What is Russia's strategy there? How do Russian instruments of influence and military developments support that strategy? What key interests do other Black Sea littoral states want to advance and protect? What are the elements of a sustainable Western strategy to protect those interests? 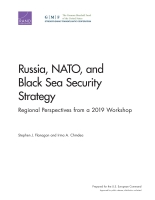 Regional Perspectives from a 2019 Workshop

The Black Sea region is a central locus of the competition between Russia and the West for the future of Europe. The region experienced two decades of simmering conflicts even before Moscow's illegal annexation of Crimea in 2014, and Russia has used military force against other countries in the region four times since 2008. As participants at a March 2019 workshop in Bucharest, Romania, discussed, Russia is also using informational, economic, energy, and clandestine instruments to advance its goals of transforming the Black Sea, along with the Sea of Azov, into virtual internal waterways, where Russia can have the kind of freedom of action it has achieved in the Caspian Sea. While the Black Sea littoral countries want to protect themselves from Russian hostile interference, domestic political factors as well as the countries' membership in or level of association with the European Union and NATO influence the degree of overlap and divergence in their interests. Under the circumstances, it is difficult for Western countries to craft and implement a coherent, sustainable strategy to protect common interests and counter malign Russian influence and intimidation, even as it is critical that they do so.

The differing and often divergent interests of countries in the region make it difficult to frame a unified, sustainable Western strategy to counter malign Russian influence and intimidation in the area

This workshop and research were sponsored by the Russia Strategic Initiative of the United States European Command (EUCOM) and conducted within the International Security and Defense Policy Center of the RAND National Defense Research Institute, a federally funded research and development center sponsored by the Office of the Secretary of Defense, the Joint Staff, the Unified Combatant Commands, the Navy, the Marine Corps, the defense agencies, and the defense Intelligence Community.