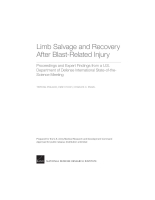 Proceedings and Expert Findings from a U.S. Department of Defense International State-of-the-Science Meeting

During the conflicts in Iraq and Afghanistan, there have been changes in the mechanism, severity, and complexity of injuries from improvised explosive devices — changes that have resulted in a higher incidence of combat-related traumatic injuries. Battlefield medical advances and improvements in protective equipment have resulted in a greater proportion of blast-exposed service members surviving their severe injuries, and progress in surgical reconstruction and rehabilitation has resulted in an increased medical capacity to salvage limbs despite the severe injuries. Collectively, these developments have led to important questions about when to emphasize limb salvage over other treatment options, most notably amputation, for individuals with severe blast-related limb injuries.

To address these questions, the Eighth Department of Defense State-of-the-Science Meeting (SoSM) on Blast Injury Research was held in March 2019 at the RAND Corporation's office in Arlington, Virginia. The topic of the meeting was "Limb Salvage and Recovery After Blast-Related Injury." Participants and presenters included scientists, clinicians, and policymakers from DoD, including the Departments of the Army, Navy, and Air Force; the Marine Corps; the National Institutes of Health; and the U.S. Department of Veterans Affairs; as well as representatives from academia, industry, and a number of different countries. These conference proceedings summarize the presentations and the findings, conclusions, and recommendations that have emerged from SoSM expert-led working groups.

This research was sponsored by U.S. Army Medical Research and Development Command and conducted within the Forces and Resources Policy Center of the RAND National Defense Research Institute, a federally funded research and development center sponsored by the Office of the Secretary of Defense, the Joint Staff, the Unified Combatant Commands, the Navy, the Marine Corps, the defense agencies, and the defense intelligence enterprise.