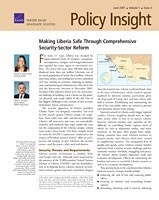 For some 15 years, Liberia was wracked by unprecedented levels of brutality, corruption, incompetence, intrigue, and foreign adventures that engulfed the entire region in intertwined conflicts. The unrest left more than 200,000 dead and displaced more than one million Liberians, out of an initial population of barely three million. Liberia’s state army, police, and intelligence services unleashed civil war, ruining its economy, reducing its population, and destroying its infrastructure. Elected in free and fair democratic elections in November 2005, President Ellen Johnson-Sirleaf faces the monumental challenge of building a new Liberia on the political, physical, and moral rubble of the old. One of her biggest challenges is the creation of new security institutions, forces, and practices. This Policy Insight, based on work the RAND Corporation conducted at the request of President Johnson-Sirleaf, offers an architecture and strategy to give Liberians the security sector — and the peace — they need and deserve.