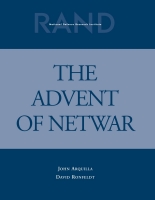 The Advent Of Netwar

The information revolution is leading to the rise of network forms of organization, with unusual implications for how societies are organized and conflicts are conducted. "Netwar" is an emerging consequence. The term refers to societal conflict and crime, short of war, in which the antagonists are organized more as sprawling "leaderless" networks than as tight-knit hierarchies. Many terrorists, criminals, fundamentalists, and ethno-nationalists are developing netwar capabilities. A new generation of revolutionaries and militant radicals is also emerging, with new doctrines, strategies, and technologies that support their reliance on network forms of organization. Netwar may be the dominant mode of societal conflict in the 21st century. These conclusions are implied by the evolution of societies, according to a framework presented in this RAND study. The emergence of netwar raises the need to rethink strategy and doctrine to conduct counternetwar. Traditional notions of war and low-intensity conflict as a sequential process based on massing, maneuvering, and fighting will likely prove inadequate to cope with nonlinear, swarm-like, information-age conflicts in which societal and military elements are closely intermingled.

The research described in this report was performed under the auspices of RAND's National Security Research Division.

This report is part of the RAND Corporation Monograph report series. The monograph/report was a product of the RAND Corporation from 1993 to 2003. RAND monograph/reports presented major research findings that addressed the challenges facing the public and private sectors. They included executive summaries, technical documentation, and synthesis pieces.