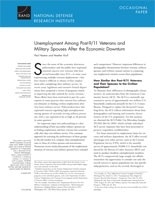 Policymakers need to understand whether military spouses succeed at finding jobs and how veterans fare economically after they leave military service. But these groups differ from the civilian population in important ways, making comparisons difficult. Researchers must adjust comparisons to account for demographic differences across these populations to provide useful information to policymakers. Using data from the American Community Survey, the authors take a snapshot of unemployment among post-9/11 veterans and military spouses. Adjusting for demographic differences, they find that unemployment rates among these veterans are above those of their civilian counterparts but not dramatically so. For military spouses, they observe that unemployment rates are appreciably above those of comparable civilians but below other published estimates of the unemployment rate for this population. They determine that veterans and military spouses may face important employment obstacles deserving of policymakers' attention, but the situation may not be as extreme as some have suggested.

This research was conducted jointly by RAND Health's Center for Military Health Policy Research and the Forces and Resources Policy Center of the RAND National Defense Research Institute (NDRI), and was sponsored by the Office of the Director — Cost Assessment and Program Evaluation, Office of the Secretary of Defense.

This report is part of the RAND Corporation occasional paper series. RAND occasional papers may include an informed perspective on a timely policy issue, a discussion of new research methodologies, essays, a paper presented at a conference, or a summary of work in progress. All RAND occasional papers undergo rigorous peer review to help ensure that they meet high standards for research quality and objectivity.