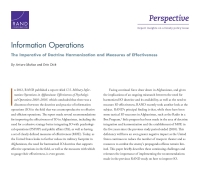 The Imperative of Doctrine Harmonization and Measures of Effectiveness

In an update to a 2012 RAND report on information operations (IO) in Afghanistan, this Perspective describes the continuing challenges of IO doctrine integration and harmonization and the establishment of measures of effectiveness for IO within the Department of Defense. Despite recommendations made in the 2012 report, little progress has been made in these areas, which will have an even greater negative impact as the United States reduces the number of troops in theater and as resources to combat the enemy's propaganda offense remain limited.

While there have been some tactical IO successes in Afghanistan, little progress has been made in the area of doctrine integration and harmonization and the establishment of measures of effectiveness in the five years since the previous study period ended (2010).

This research was conducted within the Intelligence Policy Center of the RAND National Defense Research Institute, a federally funded research and development center sponsored by the Office of the Secretary of Defense, the Joint Staff, the Unified Combatant Commands, the Navy, the Marine Corps, the defense agencies, and the defense Intelligence Community.