This perspective draws on a December 2013 RAND workshop to assess four possible future scenarios for the conflict in Syria: prolonged conflict, regime victory, regime collapse, and negotiated settlement. The authors update and reassess these scenarios based on developments in Syria and Iraq through August 2014 and explore the implications that each has for Syria, the region, and the United States. 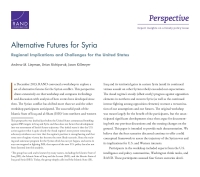 Regional Implications and Challenges for the United States

The civil war in Syria poses a thorny problem for U.S. policymakers. The conflict has morphed from a popular uprising against an autocratic regime into a multi-sided battle involving government forces, pro-government militias, Hezbollah, Iraqi Shi'ite militias, secular/moderate rebels, Kurdish separatists, traditional Islamist rebels, nationalist Salafi-jihadist rebels, and the transnational Salafi-jihadist Islamic State of Iraq and al-Sham (ISIS) movement. Most neighboring states and several Persian Gulf states have sent arms and money to one or more of the factions in this war. Iran and Russia have consistently supported the Assad regime, including providing advanced weaponry, since the onset of the conflict. The outcome of the conflict will affect Middle East stability and regional political dynamics for years — perhaps decades — and could exacerbate a wider Shi'a-versus-Sunni sectarian conflict in the region.

Momentum has shifted several times during the course of the conflict. Defections from the Syrian army, rapidly growing rebel ranks, and the regime's loss of key ground convinced many observers early on that the Assad's demise was only a matter of time. The Assad regime has exploited rebel weaknesses and its own superior weaponry and external support to shift the momentum once again in its favor. The lineup of antagonists is complex and confused. While still seeing the Assad regime as an adversary based on its patron-client relationship with Iran and its implacable hostility toward Israel, U.S. decisionmakers are also dealing with the threats caused by the dramatic recent gains made in Iraq by ISIS and the influence it wields within the Syrian rebel movement. To examine these challenges, this perspective draws on a December 2013 RAND workshop to assess four possible future scenarios for the conflict in Syria: prolonged conflict, regime victory, regime collapse, and negotiated settlement. The authors update and reassess these scenarios based on developments in Syria and Iraq through August 2014 and explore the implications that each has for Syria, the region, and the United States.

Workshop participants felt that prolonged conflict was the best descriptor for the situation in Syria as of December 2013, but momentum seemed to be leaning toward regime victory.

Developments in Syria and Iraq through August 2014 occurred with unanticipated speed and revealed initial analysis to be overly cautious.

Despite the revised perspective on the plausibility of regime victory in Syria, the situation is still fluid and momentum can shift again.

This research was conducted within the Intelligence Policy Center of the RAND National Defense Research Institute, a federally funded research and development center sponsored by the Office of the Secretary of Defense, the Joint Staff, the Unified Combatant Commands, the Navy, the Marine Corps, the defense agencies, and the defense Intelligence Community.