This Perspective provides an overview and analysis of sources of Russian foreign policy to help explain Russia's actions in Ukraine in 2014 and 2015. It evaluates arguments based on Russian historical strategic interests, economic policy, and domestic policy to determine which explanations, alone or in combination, stand up best to the realities of Russian choices and actions. 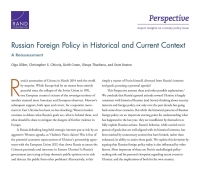 This Perspective provides an overview and analysis of sources of Russian foreign policy to help explain Russia's actions in Ukraine in 2014 and 2015. It evaluates arguments based on Russian historical strategic interests, economic policy, and domestic policy to determine which explanations, alone or in combination, stand up best to Russia's actual choices and actions. The authors conclude that Russia's general attitude toward Ukraine is largely consistent with historical Russian (and Soviet) thinking about security interests and foreign policy, which have focused on buffer states, influence on its neighbors, and a perception of continued competition with the United States. However, these historical patterns alone are insufficient to fully explain Russian actions. Neither can public opinion, elite interests, or the pursuit of economic growth be defined as key drivers of Russian behavior. Moscow has sought to shape, rather than respond to, public opinion, and has done so with great success. Decisionmaking in the Kremlin has become highly centralized, obviating the possibility of elite group influence. Finally, economic growth goals have been jettisoned, rather than pursued, in this crisis. This said, the authors argue that an important component of the Kremlin's decision calculus also stems from how Russia's leaders, particularly Russian President Vladimir Putin, have interpreted the implications of the Maidan uprising in Ukraine for their own country. As a result, Putin's fear that popular opposition and unrest will threaten his power has led him to endanger many of the things he has worked to build over his tenure.

Neither Elite Nor Public Views on Specific Issues Appear to Drive Russian Policy, Although the Regime Is Deeply Fearful of Elite and Public Opposition to Its Actions

Putin's Personal Leadership Style and Viewpoints Were Likely Critical to the Specific Actions Taken, Although Not to the Attitudes That Drove Them

This research was conducted within the Strategy, Doctrine, and Resources Program, a part of the RAND Arroyo Center.