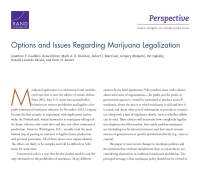 Options and Issues Regarding Marijuana Legalization

Marijuana legalization is a controversial and multifaceted issue that is now the subject of serious debate. Since 2012, four U.S. states have passed ballot initiatives to remove prohibition and legalize a for-profit commercial marijuana industry. In December 2013, Uruguay became the first country to experiment with legalization nationwide; the Netherlands tolerates only retail sales and does not allow commercial production. Voters in Washington, D.C., recently took the more limited step of passing an initiative to legalize home production and personal possession. All of these moves were unprecedented. The effects are likely to be complex and will be difficult to fully assess for some time. The goal of this paper is to review recent changes in marijuana policies and the decisions that confront jurisdictions that are considering alternatives to traditional marijuana prohibition. The principal message is that marijuana policy should not be viewed as a binary choice between prohibition and the for-profit commercial model seen in Colorado and Washington State; several intermediate supply options should be discussed. In addition, this piece addresses other key decisions that need to be made about taxation and regulations. It also walks through some of the potential consequences of legalizing marijuana, highlighting the massive uncertainty surrounding many of these outcomes.

This report was conducted within the RAND Drug Policy Research Center and results from the RAND Investment in People and Ideas program.