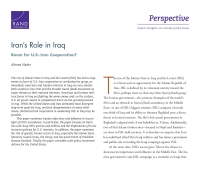 The rise of Islamic State in Iraq and the Levant (ISIL) has led to arguments in favor of U.S.-Iran cooperation in combating the group, as immediate American and Iranian interests in Iraq are very similar: Both countries view ISIL and the broader Sunni jihadi movement as major threats to their national interests. American and Iranian military forces in Iraq are fighting the same enemy and, on the surface, U.S. air power seems to complement Iran's on-the-ground presence in Iraq. While the United States and Iran ultimately have divergent long-term goals for Iraq, and face disagreements on many other issues, limited tactical cooperation in weakening ISIL in Iraq may be possible.

This paper examines Iranian objectives and influence in Iraq in light of ISIL's ascendance. In particular, the paper focuses on Iran's ties with Iraqi Shi'a parties and militias and the implications of Iran's sectarian policies for U.S. interests. In addition, the paper examines the role of specific Iranian actors in Iraq, especially the Islamic Revolutionary Guard Corps, in addition to the clergy and the Rouhani government. Finally, the paper concludes with policy recommendations for the United States.

Explicit U.S. cooperation with Iran in Iraq may help weaken ISIL, but it is unlikely to solve the region's increasing insecurity, which is due in part to Iran's sectarian politics.

Beyond tactical cooperation in the fight against ISIL, it is difficult to see a fundamental shift of behavior in Tehran that could lead to long-lasting U.S.-Iran cooperation.

This research was sponsored by the Office of Secretary of Defense and was conducted within the International Security and Defense Policy Center of the RAND National Defense Research Institute, a federally funded research and development center sponsored by the Office of the Secretary of Defense, the Joint Staff, the Unified Combatant Commands, the Navy, the Marine Corps, the defense agencies, and the defense Intelligence Community.