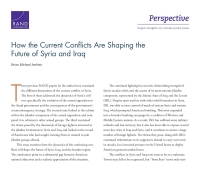 Continued fighting has seen the diminishing strength of Syria's secular rebels and the ascent of its most extreme jihadist component, represented by the Islamic State of Iraq and the Levant (ISIL). Despite open warfare with other rebel formations in Syria, ISIL was able to seize control of much of eastern Syria and western Iraq, which prompted American bombing. This soon expanded into a broader bombing campaign by a coalition of Western and Middle Eastern nations. As a result, ISIL has suffered some military setbacks and lost territory, but it also has been able to capture several more key cities in Iraq and Syria, and it continues to attract a large number of foreign fighters. The threat they pose, along with ISIL's continued exhortations to its supporters abroad to carry out terrorist attacks, has increased pressure on the United States to deploy American ground combat forces. This essay examines how the dynamics of continuing conflicts will shape the future of Syria, Iraq, and the broader region. The conclusions point to a substantial gap between American national objectives and a realistic appreciation of the situation.

This RAND-Initiated Research was conducted within the International Security and Defense Policy Center of the RAND National Defense Research Institute, a federally funded research and development center sponsored by the Office of the Secretary of Defense, the Joint Staff, the Unified Combatant Commands, the Navy, the Marine Corps, the defense agencies, and the defense Intelligence Community.