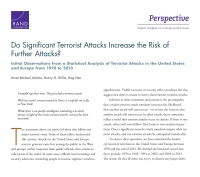 Do Significant Terrorist Attacks Increase the Risk of Further Attacks?

Using the Global Terrorism Database, the researchers find an absence of clustering for terrorist events around trigger events since 1994, no increases in terrorism on significant dates, and a decline of terrorism in the West since the 1970s, suggesting that the threat of terrorism should not affect individuals' behavior and decisions in the United States and Western Europe — not even in the wake of a significant terrorist event. However, heightened security may be justified. It may enable authorities to respond quickly to increased reports of suspicious activity and hoaxes that terrorist events inspire. Increased police presence also permits authorities to diagnose and intervene more rapidly if there are further incidents. Moreover, temporary security increases may be warranted as a precautionary measure, even if only to reassure an alarmed public that it is safe.

This research was conducted within the RAND Homeland Security and Defense Center (HSDC), a joint center of two research divisions: RAND Justice, Infrastructure, and Environment and the RAND National Security Research Division.