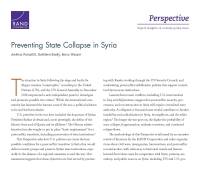 This paper offers recommendations for U.S. policy for a postconflict transition in Syria that prevents state collapse, reduces the potential for the recurrence of war, and defeats terrorist groups that have taken hold in the country. These three objectives, we suggest, are best achieved by working with Russia and through the United Nations Security Council, especially in the absence of a regional consensus to end the war. Furthermore, Syria's political culture and modern history reflect a tradition of centralization and nationalism, which should be acknowledged in postconflict planning. In contrast, policies that seek to divide the country or deliberately or inadvertently weaken or destabilize state institutions — such as support for armed groups that carry out attacks against the state or postconflict governance and reconstruction plans that overemphasize local governance at the expense of the state — may ultimately prove counterproductive in preventing a return to conflict and violence.

The analysis and recommendation presented in this paper should be of interest to policymakers, media, and scholars who specialize in U.S. foreign policy, Syria, and the Middle East.

Most Urgent Threat to U.S. Interests in Syria Is Spread of Terrorist Groups

This research was conducted within the International Security and Defense Policy Center of the RAND National Defense Research Institute, a federally funded research and development center.