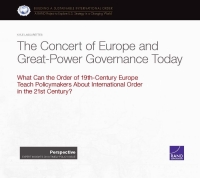 The Concert of Europe and Great-Power Governance Today

What Can the Order of 19th-Century Europe Teach Policymakers About International Order in the 21st Century?

This Perspective describes the key principles of the Concert of Europe, analyzes its effects, and draws implications for future U.S. policy toward the international order. The Concert was a system of informal rules that were both recognized and practiced between the great powers of Europe beginning in 1814, after the French Revolution and Napoleonic Wars. In the Concert's early years, regular consultation among these actors and a norm against unilateral attempts at aggrandizement on the continent fostered great-power peace and territorial stability in Europe. U.S. policymakers can learn from the strengths of the Concert system, which included accepting the realities of unequal power between its members and developing flexible processes for resolving disputes. The Concert's stabilizing influence on great-power relations diminished by the outbreak of the Crimean War in 1853, partly because of disagreements about how to respond to revolutionary movements within states throughout Europe. As the United States considers future policies toward the post-World War II, liberal international order, it should develop agreed upon processes for resolving deep disagreements before they become insurmountable.

This research was conducted within the International Security and Defense Policy Center of the RAND National Defense Research Institute, a federally funded research and development center.