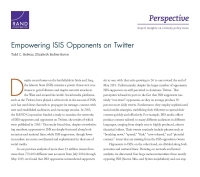 This Perspective presents options for operationalizing recent RAND Corporation findings about ISIS opponents and supporters on Twitter. This paper formulates a countermessaging approach for two main communication pathways. First, we articulate an approach for working with influential Twitter users in the Arab world to promote bottom-up and authentic counter-ISIS messaging. Second, we highlight ways that U.S. and partner governments and nongovernmental organizations can use our analysis to more effectively implement top-down messaging to directly counter ISIS support on Twitter. Our original study found that there are six times the number of ISIS opponents than there are supporters on Twitter. We argue that it is critical to empower these influencers by drawing on lessons from the commercial marketing industry. We consequently highlight approaches to identify influencers on social media and empower them with both training and influential content.

While Social Media Is Still Relatively New, Many of the Best Practices for Using It Are Based on Well-Understood Marketing Approaches

This RAND-initiated research was conducted within RAND's Center for Middle East Public Policy.