Russia has demonstrated its military competence and operational flexibility through operations in Crimea, eastern Ukraine, and Syria. Recent Russian actions have highlighted the need for a more comprehensive understanding of Russian military capabilities and operations. This perspective provides a primer on how Russia's military might fight in the event of a major conflict against a peer or near-peer adversary. 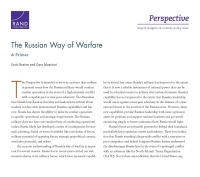 Russia has recently carried out substantial reforms to its military forces, increasing capability in several key areas. Russia's military has improved to the extent that it is now a reliable instrument of national power that can be used in a limited context to achieve vital national interests. Russian strategists, concerned about the capability of an advanced military adversary to carry out a large-scale conventional aerospace campaign against the Russian heartland, focus on preserving Russian influence in buffer states along its borders and on reinforcing a series of defensive bulwarks. Russian operations will show a high degree of coordination across a wide range of military units, using deception and simultaneity to achieve objectives quickly and minimize periods of vulnerability to an adversary's most dangerous capabilities. Russian tactics will continue to heavily emphasize gaining and maintaining fire superiority over an adversary; leveraging improved ISR capabilities and a wide range of fires platforms; and using speed, surprise, and integrated combined arms in maneuver forces to disrupt and overwhelm enemies once encountered.

This research was sponsored by the Deputy Chief of Staff, G-3/5/7, United States Army, and conducted within the Strategy, Doctrine, and Resources Program, of the RAND Arroyo Center.