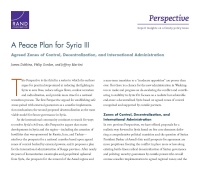 A Peace Plan for Syria III

This Perspective is the third in a series in which the authors argue for practical steps aimed at reducing the fighting in Syria to provide more time for a national transition process. As the international community continues to search for ways to resolve Syria's civil war, this Perspective argues that recent developments in Syria and the region — including the cessation of hostilities that was sponsored by Russia, Iran, and Turkey — reinforce the prospects for a national ceasefire based upon agreed zones of control backed by external powers, and it proposes a plan for the international administration of Raqqa province. After nearly six years of humanitarian catastrophe and geopolitical upheaval from Syria, the prospects for the removal of the Assad regime and a near-term transition to a "moderate opposition" are poorer than ever. But there is a chance for the new administration in Washington to make real progress on de-escalating the conflict and contributing to stability in Syria if it focuses on a realistic but achievable end-state: a decentralized Syria based on agreed zones of control recognized and supported by outside partners.