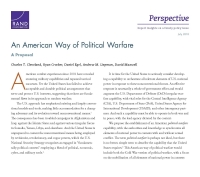 An American Way of Political Warfare

American combat experiences since 2001 have revealed stunning military capabilities and repeated tactical successes. Yet the United States has failed to achieve acceptable and durable political arrangements that serve and protect its interests, suggesting that there are fundamental flaws in its approach to modern warfare. This approach has emphasized conventional models and tools, making little accommodation for a changing adversary and its evolution toward nonconventional means, and the United States has proven unprepared for what the National Security Strategy has recognized as "fundamentally political contests" combining political, economic, cyber, and military means.

The authors propose the establishment of an American political warfare capability to orchestrate all relevant elements of U.S. national power in response to these nonconventional threats, both in war and in peace. This capability must be jointly funded and supported by both the Department of Defense and the Department of State, because of the requirement to operate in contests with and without armed conflict, with vital roles for the Intelligence Community and the United States Agency for International Development. Given political warfare's deliberate whole-of-government nature, the establishment of this capability would require support from both the President and Congress.

Critical to the success of this capability is the establishment, alongside the requirement for the capability itself, of a national political warfare center for studying, understanding, and developing whole-of-government concepts of action (policy, strategy, and campaigns) for responding to nonconventional threats. This center would provide the United States a needed venue to study and prepare for warfare in this space between peace and war.

This research was sponsored by the Smith Richardson Foundation and conducted within the International Security and Defense Policy Center of the RAND National Security Research Division.