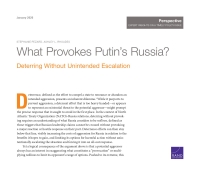 Deterrence presents an inherent dilemma: While it seeks to prevent aggression, a deterrent effort that is too heavy-handed or appears to represent an existential threat to the potential aggressor might prompt that precise response. In the context of North Atlantic Treaty Organization (NATO)–Russia relations, deterring without provoking requires an understanding of what Russia considers to be "redlines," defined as those triggers that Russian leadership claims cannot be crossed without provoking a major or hostile response on their part.

The authors of this Perspective provide a better understanding of what provokes Putin's Russia. They identify Russia's claimed redlines before examining those developments that prompted Russia to escalate a dispute in the past and comparing them with the identified redlines. Next, they analyze how current and future deterrence efforts on the part of the United States and NATO might collide with Russian stated interests and cross these redlines.

The authors find that predicting Russian reactions to U.S. and NATO movements is a challenging exercise, as some claimed redlines have proven not to be redlines at all, while in other cases, actions taken by the United States and its allies have triggered unexpectedly strong Russian responses. Overall, changes in force posture seem to hold the most potential for effective deterrence if carefully calibrated to minimize the risks of provoking Russia.