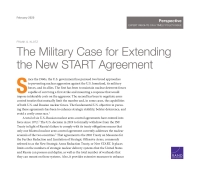 The Military Case for Extending the New START Agreement

With the U.S. decision in 2019 to withdraw from the Intermediate-Range Nuclear Force Treaty, only one bilateral nuclear arms control treaty remains in force: the 2010 Treaty on Measures for the Further Reduction and Limitation of Strategic Offensive Arms, commonly referred to as the New Strategic Arms Reduction Treaty, or New START. However, New START is set to expire in February 2021. The U.S. government is reportedly still considering whether to exercise the option to extend New START by up to five years.

The U.S. military has important equities in the outcome of this debate. By capping the number of Russian long-range ballistic missiles and nuclear-equipped heavy bombers and putting in place comprehensive verification measures, New START reduces uncertainty regarding Russian nuclear forces and thereby provides the U.S. military with greater confidence in its own plans and capabilities.

Therefore, national security policymakers need to be conversant on the key provisions of New START, the ways in which the treaty supports U.S. military objectives, and the broader political context in which the current debate over its extension is taking place. This Perspective addresses each of these topics in turn. The author concluded that the United States should seek now to extend the treaty to gain the time needed to negotiate a replacement agreement that addresses a broader range of nuclear delivery systems and China's growing nuclear capability.

The research described in this Perspective was funded by the U.S. Air Force and conducted by the Strategy and Doctrine Program within RAND Project AIR FORCE.