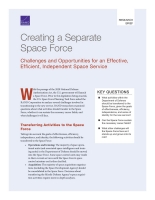 Challenges and Opportunities for an Effective, Efficient, Independent Space Service

With the passage of the 2020 National Defense Authorization Act, the U.S. government will launch a Space Force. Prior to this legislation being enacted, the U.S. Space Force Planning Task Force asked the RAND Corporation to analyze several challenges involved in transitioning to the new service. RAND researchers examined questions about what activities should transfer to the Space Force, whether it can sustain the necessary career fields, and what challenges it will face.

Transferring Activities to the Space Force

Taking into account the goals of effectiveness, efficiency, independence, and identity, the following activities should be transferred to the Space Force:

The above transfers will likely create new seams between the Space Force and the other services and the organizations it supports. The services will need to retain appropriate organic space expertise and establish liaisons and new relationships with the Space Force to support their unique needs and requirements. The full report provides detailed unit-by-unit and function-by-function recommendations for transfers to the Space Force.

The Space Force will need people skilled in space operations, space intelligence, space acquisition, and other STEM disciplines. The new service will face two challenges to building and maintaining such a workforce:

The full report provides example analyses for key career fields and outlines an appropriate approach for the remaining analytic requirements.

This is not the first time the U.S. military has created a new organization separate from other defense organizations. The Air Force, the Marine Corps, Cyber Command, Special Operations Command, and the Coast Guard had similar origins. Lessons from those cases suggest additional challenges the Space Force will need to address, such as the following:

The analysis suggests that the Space Force (and, in some cases, other services) should pursue the following actions to increase its likelihood of developing into a successful organization: