Although elderly Medicare beneficiaries account for more than a third of the nation's pharmaceutical expenditures, the Medicare program currently offers no prescription drug coverage. While the federal government considers various ways to make prescription drugs more affordable for this population, a number of states, including California, have passed laws creating pharmaceutical assistance programs. A RAND team, led by physician Joy Lewis, recently assessed the effectiveness of the California law, which mandates that pharmacies must reduce the costs of prescription medications to elderly Medicare beneficiaries. They found that a high percentage of pharmacies in the state's two largest metropolitan areas were not complying with the new law, and, in most cases, elderly beneficiaries had to request the discounts. Because many elderly beneficiaries may be unaware of the benefit, the potential cost savings, which turns out to be substantial, often is not realized.

Prescription Drug Costs Are a Problem for Many Medicare Beneficiaries

Over the past decade, expenditures for pharmaceuticals have risen dramatically for the elderly, as new treatments have appeared for the myriad chronic diseases and conditions that affect this growing population. More than one-third of elderly Medicare beneficiaries have three or more chronic conditions.

Two-thirds of Medicare beneficiaries have some type of prescription drug coverage through employer-sponsored or privately purchased supplemental ("Medi-Gap") insurance. However, for many, this coverage is expensive and unstable, and one-third of beneficiaries remain without coverage. These beneficiaries have high out-of-pocket drug expenditures, and those on modest incomes tend to forgo necessary medications.

Many options have been considered for making pharmaceuticals more affordable for elderly Medicare beneficiaries. Several of the leading pharmaceutical manufacturers have offered seniors discount cards for company products. Federal policymakers have proposed options ranging from providing comprehensive drug coverage under Medicare to subsidizing supplemental insurance policies that will cover medications. Meanwhile, a number of states have enacted their own legislation requiring that Medicare beneficiaries be allowed to purchase drugs at reduced cost.

California law SB393, enacted in 1999, mandates that Medicare beneficiaries who present their Medicare cards to pharmacies participating in the state Medicaid program (known as Medi-Cal) must be offered name-brand prescription medications at prices that do not exceed the Medi-Cal reimbursement rate for those medications. Under the law, the pharmacies bear the burden of these cost reductions to beneficiaries. To alert pharmacies to this new law, the California Department of Health Services sent three notices and a Medi-Cal bulletin that highlighted the pricing change, and the sponsoring legislator held several press conferences.

However, concerns have been raised about whether the new law was achieving its goal. No steps were taken to inform the Medicare population of the new law, and it is unlikely that many beneficiaries would spontaneously present their Medicare cards to their pharmacists, since they are not accustomed to receiving Medicare pharmacy benefits. Furthermore, the new legislation includes no provision for monitoring pharmacy compliance.

To address these concerns, RAND assessed pharmacy compliance in California's two largest metropolitan areas: Los Angeles County to the south and the San Francisco Bay Area to the north. They also assessed the potential savings to beneficiaries under the law.

The researchers trained experienced actors and actresses, old enough to receive Medicare, to gather the information needed to assess pharmacy compliance. These "standardized patients" visited a random sample of all licensed chain and independent pharmacies that participated in Medi-Cal throughout both regions (500 in all). They followed a script in which they asked the prices of three brand-name medications commonly used by the elderly: Vioxx, a nonsteroidal anti-inflammatory drug for the treatment of osteoarthritis; Lipitor, a cholesterol-lowering agent; and Zoloft, an antidepressant.

Compliance Varied with the Type of Pharmacy

The researchers used a generous definition of "compliant." They considered pharmacies compliant with SB393 if, at any time during an exchange with a standardized patient, pharmacists offered the Medi-Cal price or referred to a special price but said they could not quote the price without a prescription. The standardized patients also noted how much effort it took before they were quoted the lower prices. After obtaining (nondiscounted) prices, the standardized patients would ask whether the pharmacy offered a "senior discount," and, if so, the discounted price. The standardized patients would then present their Medicare cards and ask for a "Medicare discount." Finally, they would note the presence or absence of printed signs indicating the availability of "senior" or "Medicare" discounts. Thus, the script enabled the researchers to determine if, and when, during the interactions with pharmacists or salespeople, the mandated discounts were offered. The responses they received from the pharmacists were recorded and later analyzed.

The ease with which patients were able to obtain the discount also varied (see figure). Some but not all pharmacies were proactive in offering the discount. Fewer than 10 percent offered the discount without being asked, and about one-third offered it after being asked about senior discounts. This latter figure ranged from 12 percent of independents to 60 percent of chain pharmacies. Only 14 percent of the pharmacies had posted signs indicating they offered a discount. 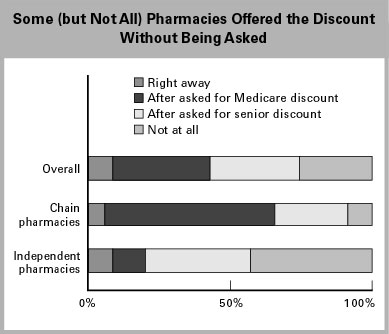 To determine whether Medi-Cal prices would result in cost savings for Medicare beneficiaries, the researchers compared the retail costs for a one-month supply of the three test medications at the pharmacies visited by the standardized patients with the Medi-Cal prices.

The Effectiveness of the State's Drug Pricing Legislation Can Be Improved

These findings show that the new California law offers Medicare beneficiaries substantial cost savings for prescription medications, but the study also suggests that the savings are not being realized. Probable reasons include the scant publicity that accompanied passage of the law and the lack of a built-in mechanism to monitor compliance.

California's experience with legislating a prescription drug discount program for Medicare beneficiaries offers a number of lessons to policymakers who are designing similar programs at the federal and state levels:

A bill newly proposed to the California legislature includes these recommended modifications.

This Highlight summarizes RAND research reported in the following publication:

Abstracts of all RAND Health publications and full text of many research documents can be found on the RAND Health web site at www.rand.org/health. This research brief is also available in printed form.

RAND is a nonprofit institution that helps improve policy and decisionmaking through research and analysis. RAND Health furthers this mission by working to improve health care systems and advance understanding of how the organization and financing of care affect costs, quality, and access. RAND® is a registered trademark.

All rights reserved. Permission is given to duplicate this on-line document for personal use only, as long as it is unaltered and complete. Copies may not be duplicated for commercial purposes.