Prospects for Democratization in the Arab World 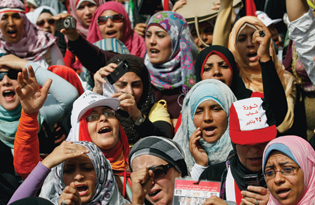 Revolutionary protests in 2011 up-ended long-standing authoritarian regimes in the Arab world. What lies ahead for Egypt, Tunisia, and other nations undergoing political change? How can the challenges of moving from regime change to democratic governance be overcome? RAND researchers mined four decades of democratization successes and setbacks for lessons.

On December 17, 2010, Tunisian street vendor Mohammed al-Bou'azizi's self-immolation ignited revolutionary protests across the Arab world. Masses of people began calling for political and economic change. In Tunisia, Egypt, Libya, and Yemen, rulers were ousted. In Syria, Bahrain, and elsewhere, old regimes were newly challenged in the streets and online. Governing structures in the region, previously untouched by global democratization trends, were shaken by the Arab Spring.

Daunting challenges lie ahead for those countries where revolutions succeeded and where, as in Tunisia, Egypt, and Libya, free elections have now been held. There are no clear roadmaps for new leaders working to establish enduring democracies or for outside actors hoping to encourage democratization. However, past democratic transitions offer important lessons for policymakers by revealing the factors and actions that can contribute to the success — or failure — of transitions to democracy.

Analyzing both current developments in the Arab world and instances around the globe of democratization after regime change since the mid-1970s, RAND researchers have identified challenges that Arab countries may face, as well as approaches that new governments and the international community can take to improve the prospects for democratization.

Democracy has been gaining ground throughout the world since the mid-1970s, with considerably more countries categorized as "free" in 2011 than in 1973.[1] These changes have been felt in every region except the Arab world. Successes and setbacks encountered by democratizing nations during those four decades suggest that many challenges — including those described below — might lie ahead for Egypt, Tunisia, and other Arab countries undergoing political transitions.

These Challenges Can Be Overcome

Regime change is only the first step; now, long processes of political and institutional reform are needed.

Past experiences in diverse conditions throughout the world show that the types of challenges Arab countries in transition face can be overcome. Particular factors tending to contribute to or undermine democratization rarely determine outcomes. Failure to meet popular expectations of improved living standards can make a transition more difficult, for example, but in such countries as Mongolia and Argentina, severe post–regime change economic deterioration did not derail democratization.

Arab countries lack experience with political pluralism, but so too did many other countries that have become democracies. Some Arab countries have sectarian or other social divides that will complicate efforts to build consensus around new political arrangements, but such divisions have not been a bar to democratization elsewhere.

Moreover, many past transitions have been turbulent and still succeeded. In retrospect, successful democratization often looks more inevitable than it seemed at the time. Portugal, for instance, had six provisional governments in the first 27 months of its transition, and it experienced mass purges and a transitional military government riven by ideological differences.

There are many reasons for external actors to be cautiously optimistic about and supportive of democratic transitions in Arab countries.

Democratization is a complex, multidimensional process that often unfolds over the course of many years, and circumstances in each of the Arab countries we examined are too diverse for one-size-fits-all prescriptions for new governments and for the international community. Nonetheless, certain policy approaches undertaken by leaders in transitioning Arab countries may improve the prospects for successful democratization:

Policymakers in the international community should bear in mind that external actors will have limited leverage over transition processes in the Arab world. In some circumstances, certain types of foreign aid can be helpful in smoothing transitions, and diplomatic pressure should not be neglected, but internal dynamics will be the main drivers of democratization. Nevertheless, there are many reasons for external actors to be cautiously optimistic about and supportive of democratic transitions in Arab countries. The following international policy approaches can be helpful:

This product is part of the RAND Corporation research brief series. RAND research briefs present policy-oriented summaries of individual published, peer-reviewed documents or of a body of published work.

The RAND Corporation is a nonprofit research organization providing objective analysis and effective solutions that address the challenges facing the public and private sectors around the world. RAND's publications do not necessarily reflect the opinions of its research clients and sponsors.