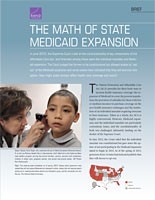 The Math of State Medicaid Expansion 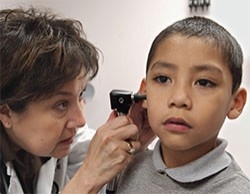 In June 2012, the Supreme Court ruled on the constitutionality of key components of the Affordable Care Act; and foremost among these were the individual mandate and Medicaid expansion. The Court judged the former to be constitutional but allowed states to "opt out" of the Medicaid expansion and some states have indicated that they will exercise this option. How might state choices affect health care coverage and costs?

The Patient Protection and Affordable Care Act (ACA) provides for three basic ways to increase health insurance coverage: the expansion of Medicaid to cover the poorest population; the provision of subsidies for those with low or medium incomes to purchase coverage on the new health insurance exchanges; and the institution of an individual mandate requiring everyone to have insurance. Taken as a whole, the ACA is highly controversial. However, Medicaid expansion and the individual mandate are particularly contentious issues, and the constitutionality of both was challenged, ultimately landing on the docket of the Supreme Court.

In June 2012, the Court ruled that the individual mandate was constitutional but gave states the option of not participating in the Medicaid expansion slated to begin in 2014. As of the spring of 2013, governors from 14 states had indicated publicly that they will choose to opt out. 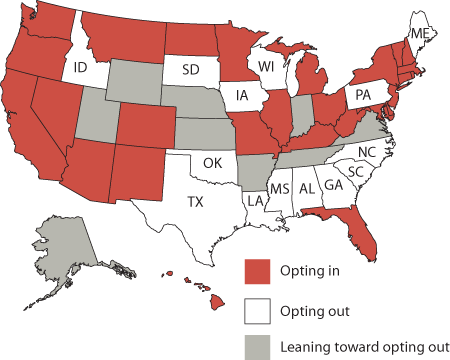 The state-by-state breakdown as of spring, 2013. States where governors have stated they will not expand Medicaid are indicated in white, states that are leaning toward opting out or seeking alternative options are indicated in gray, and the remainder are red.

Source: The Advisory Board Company

What does Medicaid expansion offer states?

Without Medicaid expansion, the poorest population could fall through a coverage gap.

If states decide not to participate in Medicaid expansion, individuals with incomes at or up to 1.38 times the federal poverty level would qualify for federal subsidies toward participation in the new health insurance exchanges. But those earning less than the federal poverty level are not eligible for subsidies, potentially leaving those at the very bottom of the income ladder without viable coverage options. 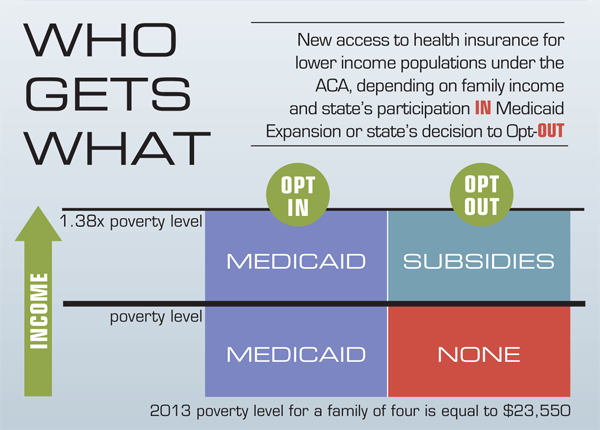 New access to health insurance for lower income populations under the gets ACA, depending on family income and state’s participation in Medicaid What Expansion or state’s decision to Opt-out

What would happen if…? 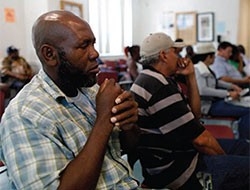 State-level policymakers seek to understand how decisions about Medicaid and federal subsidies might affect state budgets, as well as their population's health. Simulation models provide a quantitative means for predicting what will happen in the kinds of multiple futures that decisionmakers care about. RAND's Comprehensive Assessment of Reform Efforts (COMPARE) model can help to predict the decisions that individuals, families, and firms will make under various possible scenarios.

The Opt-out scenario is the most likely of these futures, given the Supreme Court's decision. To fully gauge the effect of states opting out of the expansion, we contrast the outcome under the current situation (14 states choosing to opt out) with a possible future in which all states expand Medicaid.

The decision to expand Medicaid would not substantially affect state budgets before 2017, because the majority of the cost would be borne by the federal government until that time. However, by 2020 states would be required to shoulder 10 percent of the additional costs — about $7.8 billion at 2016 spending levels. (In 2010, states spent about $126 billion on Medicaid.)

However, some of the state-level cost of Medicaid expansion would be offset by the savings from less uncompensated care brought on by increases in the percentage of patients with insurance coverage. Thus, on net, states that expand Medicaid might well spend less on the uninsured until 2020, or perhaps beyond, than without the Affordable Care Act.

What could be done about the coverage gap for low-income populations? 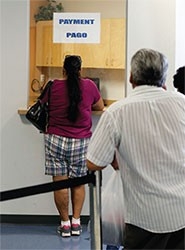 Without Medicaid expansion, individuals with incomes at or below the federal poverty level will have no viable access to health coverage. Congress could amend the ACA to extend federal subsidies to this group with negligible net effect since the cost to subsidize this population is about the same as the savings that would be gained from reductions in uncompensated care. In this alternative future (number four from our list above), an estimated 1.1 million more people would have access to insurance in the 14 states currently planning not to expand Medicaid, still leaving roughly 27 million people uninsured nationwide.

Alternatively, if Congress allowed states to expand Medicaid only to people with incomes up to 100 percent of the federal poverty level and the 14 states currently planning to opt out entirely choose to do so, about 54.4 million people would be covered under Medicaid — 8.5 million fewer than if the ACA were fully implemented. About half of the people not enrolled in Medicaid would be covered through an exchange, but 3.6 million more people would be uninsured.

Medicaid expansion is a moving target.

Estimating the overall effects of Medicaid expansion is especially challenging because state decisions about whether or not to expand Medicaid are unfolding right now. As a result, RAND researchers had to determine state participation based on what state governors said they intended to do. Whether or not those intentions will translate to action is not certain. If more states opt out of expansion, the decrease in coverage and federal payments to states will be greater and the increase in uncompensated care costs for states will be higher.

RAND's analysis suggests that Medicaid expansion is an effective way for states to expand insurance coverage.

Expansion is also a good fiscal choice: Even states that opt out will be subject to various reductions (such as the reductions in Medicare spending) and taxes stipulated in the ACA. Thus, states that choose not expand Medicaid may experience a large net transfer of federal funds out of the state.

However, it is unlikely that all states will choose expansion, at least in the near term. In the interim, extending federal subsidies to the poorest population could somewhat blunt the effect of a state's non-expansion decision and slightly increase the number of individuals covered. And while a regulatory change that allows states to only partially expand Medicaid to the poorest residents (those with incomes at or below the federal poverty level) would shift some state costs to the federal government, this policy would have little effect on the number of people covered.