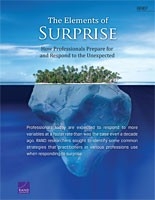 The Elements of Surprise

How Professionals Prepare for and Respond to Unexpected Events 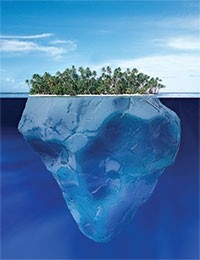 Professionals today are expected to respond to more variables at a faster rate than was the case even a decade ago. RAND researchers sought to identify some common strategies that practitioners in various professions use when responding to surprise.

In the professions that RAND researchers examined, responses to surprise can be categorized according to two key factors: the amount of time available to respond and the level of chaos in the environment.

For example, surgeons and military commandos generally must respond to events within seconds and minutes, whereas ambassadors and CEOs typically have more time available before taking action. Additionally, some professionals operate within highly controlled environments, such as sports venues or theatrical stages, while others, such as Navy SEALs, have little control over countless variables.

The structure of the environment determines how professionals respond to surprises.

The amount of time available to respond also determines how professionals respond to surprise.

An effective response depends largely on whether a surprise is recognized as a familiar (previously seen) scenario.

In moderate to highly chaotic environments, a key challenge is to understand what is happening when a surprise occurs. That is, the range of possibilities may be generally known, but that does not always mean professionals will recognize the features of a particular situation as it is unfolding. Once the nature of a surprise is recognized as similar to something the practitioner has encountered previously, the response can be focused and precise (either a specific plan worked out in advance or the appropriate general-response strategy), whereas the response to an unrecognized situation must be more tentative and generic until additional information is collected.

The most complex and chaotic situations tend to be caused by other humans rather than the environment.

While the environment can introduce a wide range of factors that contribute to unexpected situations, the actions of other humans typically create the most chaotic situations. For example, a test pilot will primarily face surprises caused by his or her environment (weather, the plane's mechanics, etc.). This is different from a Navy SEAL, who — in addition to facing surprises caused by the environment (weather, terrain, domestic animals, etc.) — will face surprises generated by other humans. Facing other humans often adds complexity to a situation because individuals operate with independent thought and their actions are often unpredictable, especially when a large number of people interact with each other. When people are at the root of a surprise, the level of complexity increases, and this dramatically magnifies the difficulty of developing specific response plans ahead of time.

The biggest surprises tend to come from third parties, not known adversaries.

For professionals in the most chaotic environments, their biggest surprises may arise from the actions of a third party (e.g., a bystander, a civilian in a military environment) rather than a direct adversary or stakeholder. People usually have a good understanding of their most direct threats; i.e., they understand the calculus that drives adversary or stakeholder behavior and can make appropriate plans to avert or respond to surprise. This still leaves professionals open and vulnerable to less predictable third-party actions, even when that third party has no adversarial intent.

Nearly all of our participants told us that nothing substitutes for experience — experience represents the best insurance policy for mitigating against possible negative effects caused by surprise. Experience is what allows professionals to quickly identify and implement a response to an unfolding surprise. Practically speaking, this means that teams and organizations seeking to minimize surprise need to attract and retain the most experienced people, since they represent an organization's best general defense against the negative effects of surprise.

Address the negative effects of surprise.

In addition to experience, we identified two more steps that professionals can take to mitigate the negative effects of surprise. We found that the most successful professionals respond to surprise with measured responses at first, rather than reacting with the full extent of available resources. This approach provides decisionmakers with more flexibility as the situation unfolds. We also found that not all surprises need to be negative — especially when the workforce is instilled with a mindset to convert surprises into opportunities or learning experiences.

Take steps to reduce the chances that something will go wrong.

We found that all practitioners interviewed say they take measures to reduce the level of chaos — the number of unknowns and complicating variables — within their work environments, citing a number of specific examples. A thoracic surgeon with whom we spoke reduces chaos by working with the same instruments and team of nurses for every surgery. Test pilots only execute one maneuver at a time; in addition, the planes are heavily instrumented with sensors to provide immediate feedback when something unusual happens. The operators of the Mars Rovers (Spirit and Opportunity) have a test unit in Pasadena, California, that they use to practice new maneuvers before deploying the actual rovers on Mars.

High-level strategists should build a network of trusted "surprise sensors" within their organization.

Top-level strategists are often in charge of large groups of people (or whole organizations) and will usually not be the first person in the organization to recognize an unexpected event. Individuals within an organizational hierarchy tend to be more reliant on a team approach to both detect and handle surprises. Successful strategists therefore benefit from a network of trusted colleagues at all levels of the organization. These networks can also function as "surprise sensors," greatly expanding the chief strategist's field of view.

Be mindful of surprises from third parties.

Most professionals focus on surprises from known adversaries, but many of the professionals with whom we spoke noted that the biggest surprises come from third parties who may not even be key stakeholders. For example, the Navy SEAL told us that some of his most challenging surprises arose from dealing with domesticated animals and civilians, rather than a direct adversary. The intuitive explanation for this phenomenon is that people usually have a good understanding of their most direct threats; i.e., they understand the calculus that drives adversary or stakeholder behavior and can make appropriate plans to avert or respond to surprise. One way to mitigate the risk posed by third parties is to conduct exercises that probe a range of future outcomes that depend on third party actions. Such an exercise will be helpful in identifying previously unknown third party risks.

This project was conducted to assist the Intelligence Community in confronting unknown threats that emerge from unexpected directions. The National Reconnaissance Office’s Advanced Systems and Technology Directorate asked RAND to investigate how other occupations prepare for and respond to unexpected events. RAND conducted interviews with 15 professionals in 13 occupations to learn how a variety of occupations respond to the unexpected:

While the sample size is small, the findings are profound and warrant additional study to validate the results in a more robust fashion.

Criteria for interview selection included a diverse set of practitioners who had a wide range of backgrounds and perspectives, had at least ten years of post-training professional experience, held a high supervisory or equivalent level of responsibility, and had otherwise distinguished themselves as superior performers in their field.