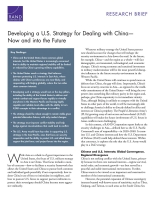 Developing a U.S. Strategy for Dealing with China — Now and into the Future

While Asia as a whole is of great importance to the United States, the focus of U.S. military strategy in Asia is on China. That focus includes a number of concerns — how to facilitate a security framework that allows the United States and China to pursue both common and individual goals peacefully if not cooperatively, how to deter China's use of force to intimidate its neighbors, and how to posture U.S. forces to support partner militaries to protect their sovereignty should China become more aggressive militarily.

Whatever military strategy the United States pursues now should account for changes that will reshape the security environment in Asia down the road. In the future, for example, China — and the region as a whole — will face demographic, environmental, technological, and economic changes. China's strong economy and sustained investment in military modernization will be the most powerful disruptive influences in the future security environment in the Western Pacific.

While the United States will continue to spend more on defense than China, the gap will close. Importantly, China's focus on security concerns in Asia — as opposed to the worldwide commitments of the United States — will bring the two powers into something like military parity in the region and, perhaps, give China superiority in its immediate vicinity. Thus, although Beijing is unlikely to compete with the United States in other parts of the world, it will be increasingly able to challenge America's ability to directly defend its allies and interests on China's periphery. The People's Liberation Army's (PLA's) growing array of anti-access and area-denial (A2AD) capabilities will make the future involvement of U.S. forces in Asian conflicts more challenging.

In this context, a RAND Corporation report looks at the security challenges in Asia — defined here as the U.S. Pacific Command's area of responsibility — in 2030–2040. It examines U.S. and Chinese interests and how the U.S. Department of Defense (DoD) could help defend those interests. Within that construct, it explores the role that the U.S. Army would play in a DoD strategy.

China is not seeking conflict with the United States, primarily because its three core national interests —regime survival, social order, and economic growth — are best served by a peaceful and stable international environment. Further, China wants to be viewed as an important and constructive member of the international community.

However, the potential expansion of Chinese sovereignty interests beyond well-known areas of sensitivity, such as Tibet, Xinjiang, and Taiwan, to such areas as the South China Sea and East China Sea may create new tensions. This will be particularly troublesome if these problems become intractable from a Chinese domestic or international perspective.

So far, China shows no clear signs of seeking to overturn the dominant liberal global order, or even to revise it dramatically. Its leaders understand that the country has, in fact, been a primary beneficiary of the system's basic principles of free trade and the overall stability it has brought to the world. However, a country as big, emergently powerful, confident, and mindful of its history as China will likely seek to modify the terms of the system to better reflect its interests, at least on the margins. This would not necessarily place China and the United States on a military collision course, but China's doing so is a potential source of stress between the two powers, both in Asia and globally.

More deeply problematic would be a China that becomes aggressively assertive of its perceived prerogatives in Asia. Indeed, China's behavior is one of two variables that will broadly drive the future of the Asia-Pacific region, with the other being the health of the international economic system.

As for U.S. interests, China's centrality in the evolving Asian political, economic, and security environment means that its relationship with the United States is and will remain the fulcrum of U.S. regional strategy. This presents a funda- mental challenge in terms of developing that strategy, because there is an inherent tension. Specifically, both countries share common global interests — stability, unimpeded trade, the maintenance and even strengthening of some multilateral institutions, avoidance of extremism, energy security, and control of nuclear weapons.

However, the tension between Chinese and U.S. interests is more pronounced regionally. The United States, for its part, is increasingly concerned that its ability to maintain its position in Asia will be limited or reduced by China's growing military capabilities. These worries have prompted it to improve its posture there; predictably, many Chinese read these measures as directed against their rightful interests and security.

Protecting and advancing U.S. interests with China will require a regional strategy for resolving the inherent tension (as shown conceptually in the figure). It should combine and balance two components: engagement with China and deterrence. Specifically, it must balance shared global priorities on economics, proliferation, and other issues with deterring Chinese encroachment on the core interests of the United States and its allies and friends. Theoretically, this is possible; practically, it will be very difficult.

Three key asymmetries — of distance, time, and stakes — favor China in any Asian security competition with the United States. Together, these asymmetries argue that traditional direct defense will become increasingly less reliable in the face of China's growing strength. This means that the threat of a conflict expanding to other areas or becoming more severe will make the U.S. Asian security strategy more risky.

Four criteria should underpin U.S. strategy development. A strategy must (1) have clear and realistic goals that flow from U.S. interests, (2) account for U.S.-Chinese cooperation on global security and economic issues, (3) be flexible and responsive to Chinese policy changes and seek to influence such decisions favorably, and (4) reflect the realities in Asia given China's real military and economic power.

Developing such a strategy would rest on five key pillars (as shown in the figure): (1) the ability of the United States to deliver and sustain combat and support forces and project power rapidly to virtually anywhere in the Western Pacific; (2) the U.S. advantage of having some highly capable and reliable local allies, such as South Korea, Japan, and Australia, and the capacity to improve the capabilities of other partners; (3) the operational difficulties for China in projecting force far beyond its borders and over water, in particular (some of which will likely diminish over time); (4) the exploitation of technology to reduce vulnerability to improved Chinese targeting; and (5) a range of credible nonnuclear escalation options for U.S. leaders, achieved by exploiting enduring U.S. advantages in global power. A particularly interesting example would be to employ ground-based anti-ship missiles to protect the sovereignty of allies and partners. Aggressive Chinese behavior could then cause the United States and its allies and partners to use these capabilities to turn "A2AD on its head" by denying Chinese access to the Western Pacific.

Aside from deterring Chinese adventurism, the U.S. military will also have a role to play in encouraging U.S.-China cooperation in the global context and helping extend that cooperation, as much as possible, into Asia and the Western Pacific. Ultimately, the United States should aim to place the onus of determining whether China will be isolated or involved in regional security arrangements squarely on Beijing.

Assessing How the Strategy Fares Against Alternative Futures

RAND's research also sought to understand how any strategy framed today would fare in the study's 2030–2040 time frame and determined that U.S. policymakers need to be prepared — at least intellectually — for three distinct Asian futures, as shown in the table.

The current situation points to a future between the first two articulated in the table. To the extent that a U.S. strategy can shape developments, it should strive to shift them in the direction of the first future, hedge against the second, and avoid the third. The recommended strategy is crafted to suit the circumstances of the current situation, but it should remain viable in the other two alternatives as well, with only modest changes.

Enhancing Crisis Stability and the Dangers of Miscalculation

U.S. military strategy in Asia must be structured to avoid creating situations in which either side's calculations begin to shift in favor of preemption and to reduce the risk of miscalculation. To the extent possible, the United States should move toward a posture that does not impose "use-it-or-lose-it" dilemmas on either U.S. or Chinese leaders early in a mounting crisis.

The biggest danger of a U.S.-China conflict will probably originate not from the calculated actions of either side but from a flow of events that leads decisionmakers to make poor, hasty, or ill-informed choices.

To minimize these dangers, U.S. strategy should not depend on inflexible concepts of operations; hardwired responses should not dictate the size, speed, or configuration of a U.S. reaction to a crisis. U.S. actions should also include a range of deterrent gestures that demonstrate an ability to impose costs on China without increasing the vulnerability of U.S. forces and without posturing those forces in a needlessly antagonistic way.

The U.S. Army's Role in Asia: A Mix of Continuity and Change

The U.S. Army's future role in Asia would be a mix of continuity and change. It would almost certainly continue to station a sizable ground combat force on the Korean Peninsula for the foreseeable future. However, its main purpose there would also include a focus on supporting the broader U.S. military strategy in the Asia-Pacific. In that regard, the Army would have six main roles:

As challenging as the proposed strategy and posture will be both technologically and operationally, the greatest challenge is to proceed in a way that does not sacrifice the goal of U.S.-China cooperation at the altar of preventing Chinese aggression. So important is the upside of positive relations between the two countries to U.S. global interests that this goal should be reinforced rather than compromised by any military strategy. It will be up to U.S. policymakers to assign missions and furnish capabilities to the U.S. military, but the way the U.S. military carries out the missions and uses its capabilities will be critical.