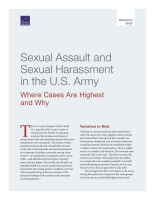 Sexual Assault and Sexual Harassment in the U.S. Army

Where Cases are Highest and Why

The U.S. Army's Deputy Chief of Staff, G-1, asked RAND Arroyo Center to extend previous RAND Corporation analyses that produced estimates of sexual assault risk and sexual harassment risk across installations and commands.[1] The results of these extended analyses showed considerable variation in the risk of sexual assault and sexual harassment across groups of soldiers, primarily among Army women—at installations, commands, and in career fields—and identified characteristics of groups where risk was higher. The results also showed considerable stability in sexual assault risk and sexual harassment risk among groups of soldiers over time. This research brief provides an overview of the principal findings of this analysis and associated recommendations.[2]

Variation in sexual assault risk and sexual harassment risk across the Army suggests where to target prevention efforts. One goal of this research was to determine whether the risk of sexual assault and sexual harassment varied by the installation where a soldier is based, the commands in which a soldier serves, or a soldier's job function. The research team estimated risk in two ways. The first was total risk, which is an estimate of the proportion of soldiers in a group who were sexually assaulted or sexually harassed during the period of interest; in this case, the period was from August 2017 to July 2018.

One explanation for these results could be that women in these groups share personal characteristics that are associated with higher or lower total sexual assault risk in the Army. For example, Fort Hood and Fort Bliss have large numbers of young, unmarried, less-educated, and junior-ranking soldiers who are at higher risk of sexual assault throughout their service. This raises the question of whether higher-risk groups of soldiers (e.g., at installations) have higher-risk soldiers assigned to such groups or whether these personnel would experience lower risk if stationed elsewhere.

The research team examined this by calculating adjusted risk, the second way in which risk was estimated. This is the risk over or under the risk predicted for personnel at each installation based on their age, deployment history, and 20 other personnel and service history risk factors. Again, across installations, Fort Hood had the highest estimated adjusted risk among Army women. Fort Bliss also had relatively high adjusted risk, which suggests that women at these bases have higher sexual assault risk than they would be expected to have if they were assigned to other similar Army bases (see Figure 1).

These findings, which indicate variation in risk of sexual assault and risk of sexual harassment, provide information that the Army could use to target prevention and response services to locations and career fields where such services could have the greatest effect—where total risk of sexual assault is high and where large numbers of personnel are stationed. For example, sexual assaults at five bases (Forts Hood, Bliss, Riley, Campbell, and Carson) accounted for 34 percent of the total number of women in the Regular Army estimated to have been assaulted in the study period. A targeted prevention program that reduced total risk to women at these five bases would have a measurable impact on Army-wide sexual assault prevalence.

Recommendation 1: To optimize reductions in Army sexual assault rates, new or supplementary prevention programs that cannot be provided to the entire Army should be targeted to those bases, commands, and career fields that have large numbers of soldiers and high total sexual assault risk.

The Connection Between Sexual Harassment and Sexual Assault

However, measuring sexual harassment risk is likely easier, cheaper, and potentially faster than measuring sexual assault risk, and it could provide nearly all of the information about sexual assault risk needed to develop tailored intervention programs. Sexual harassment risk is already routinely measured as part of the Defense Equal Opportunity Climate Survey (DEOCS), which is administered by law to every unit shortly after a change of command and then periodically thereafter. The same survey does not assess sexual assault risk in a comprehensive way.

Recommendation 2: The Army should use routinely collected survey data from the DEOCS or other surveys to more rapidly identify units, commands, bases, career fields, or other groups of soldiers with high or rising risk of sexual assault and sexual harassment. The Army should consider investing some resources in developing surveys to serve this purpose.

Characteristics of groups associated with high or low adjusted risk can inform the design of prevention efforts. The previous sections talked about groups of soldiers that experience higher risk of sexual assault or sexual harassment by virtue of the location of their assignment, their command, or the career field in which they work—information that the Army can use to target prevention programs.

But more information is needed to develop programs that are tailored to these groups; in particular, insight is needed into why these groups tend to have higher estimated risks. Therefore, one of the objectives of this project was to identify characteristics that distinguish these groups from soldiers assigned to locations, commands, or career fields that experience lower risk. The results suggest that there are areas where interventions designed to reduce sexual assault and sexual harassment can be targeted.

Higher operational tempo (the average number of months deployed during the past year) and higher separation rates (within 18 months of joining the military) are also associated with higher adjusted risk of sexual harassment for men and women. Furthermore, it is possible that higher separation rates could be related to working in locations with worse climates. Soldiers who have a negative perception of their work climate might also believe that negative behaviors are tolerated and, as a result, be less likely to continue their military careers.

Recommendation 4: Investigate the differences in soldiers' experiences in similar groups with different risk profiles—such as the 2nd and 4th Infantry Divisions—to understand what differences in work life, social life, culture, or climate might be contributing to differences in women's sexual assault and sexual harassment risk exposure. Then, test whether candidate risk factors generalize in explaining differences in risk elsewhere in the Army.

Recommendation 5: Conduct case studies of bases where adjusted sexual assault risk to women appears to have changed substantially between 2014 and 2018 and identify candidate causes of these changes. Then, test the generalizability of these causes for explaining sexual assault risk among other groups of soldiers across the Army.

The fact that risk at a base or command is likely similar to its risk two years ago (or four years ago) presents an opportunity to provide commanders with actionable information on risks faced by their commands of which they might be unaware, yet for which they will be held accountable. Commanders will appreciate leading indicators for any behavioral problems emerging within their commands, but leading indicators for sexual assault and sexual harassment have been challenging to identify. In the absence of good leading indicators, it would nevertheless be useful for commanders to know whether their units have histories of especially elevated risks of sexual assault or sexual harassment.

Recommendation 6: Share historical sexual assault risk and sexual harassment risk information with unit commanders. Doing so can forewarn commanders of known problems that are likely to persist within their units. This information can sensitize them to the possible need for special prevention measures and prepare these commanders to address problems quickly.