This report is intended to help guide discussion of the utility of Air National Guard remotely piloted aircraft (RPA) in domestic missions. It analyzes which domestic RPA missions are best suited to the ANG's current and planned capabilities, including the specific capabilities required for each mission, and explores the policy and operational constraints that ANG RPAs face. 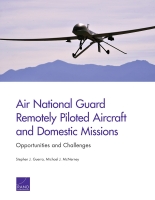 With the nation facing a variety of domestic threats and potential emergencies, policymakers are looking for ways to respond, especially as budgets decline. They need to exploit new capabilities and optimize those that already exist. Air National Guard (ANG) remotely piloted aircraft (RPAs) may offer such an opportunity. However, significant sensitivities may arise in the use of military RPAs for domestic missions. There are also constraints at both the operational and policy levels.

In Air National Guard Remotely Piloted Aircraft and Domestic Missions: Opportunities and Challenges, the authors attempt to guide the discussion of ANG's utility in domestic missions. The report analyzes which domestic RPA missions are best suited to the ANG's current and planned capabilities and explores the policy and operational constraints that ANG RPAs face in conducting such missions. The authors gathered and analyzed data on the kinds of missions that RPAs conduct domestically, the current and future capabilities of the ANG's RPA force (such as sensors), and the policy and operational constraints the ANG faces in using its RPAs to fly domestic missions.

The authors find that the current ANG RPA force can add the most value by freeing up DHS RPAs to focus on the missions for which they are best equipped: border countermigrant, border change-detection, and maritime counterdrug missions. Consequently, decisionmakers should consider ANG RPAs for incident-reconnaissance missions and, to the extent that policy restrictions allow, fixed-target surveillance. The authors also recommend developing a strategy that can help identify and address congressional concerns while providing transparency for the public as the Department of Defense works to explain its policies and uses for RPAs domestically.

There Are Five Types of Domestic RPA Missions

This research was conducted within the Acquisition and Technology Policy Center of the RAND National Defense Research Institute, a federally funded research and development center sponsored by the Office of the Secretary of Defense, the Joint Staff, the Unified Combatant Commands, the Navy, the Marine Corps, the defense agencies, and the defense Intelligence Community.