This report's analytic forecasts should help the United States determine how to support Jordan as it faces the Syrian refugee crisis. Jordanians are dissatisfied with many aspects of their government, but the chaos in neighboring states has thus far deterred civil or violent actions. If Jordan wisely invests international refugee support, it can increase popular opinion by improving the lives of Syrian refugees and Jordanian citizens. 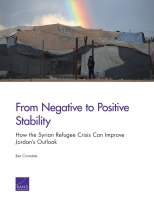 From Negative to Positive Stability

How the Syrian Refugee Crisis Can Improve Jordan's Outlook

As of late 2014, many American and Jordanian experts believe Jordan to be stable. Yet while Jordan is stable, it faces a range of existing and emerging challenges. These include chronic unemployment, sporadic political unrest, budget deficits, a water shortage, and geographically isolated yet troubling internal security concerns. The Syrian refugee crisis both exacerbates these challenges and offers opportunities to the government of Jordan. If the Syrian refugees remain relatively content and continue to assimilate into northern and central Jordan, they might directly benefit the Jordanian economy by stimulating growth. Donors and lenders have increased their support to Jordan, in turn offering the government an opportunity to improve the lives of both Syrian refugees and Jordanian citizens. Most important, Jordan benefits from what one expert terms negative stability: Jordanian citizens might be dissatisfied with many aspects of their government, but the chaos in neighboring states has thus far dissuaded Jordanians from pursuing civil or violent actions that might destabilize Jordan. Jordanians do not want their country to look like Syria, Iraq, or Egypt. Jordan is likely to undergo further and perhaps unforeseen challenges in 2015 and 2016, but it has the opportunity to alleviate many of its enduring challenges. If Jordan wisely invests forthcoming international refugee support, it has the opportunity to shift popular outlook from negative to positive — and more optimistic — stability. This report's analytic forecasts should help the United States determine how to support Jordan as it faces the Syrian refugee crisis.

There Will Almost Certainly Be Security Incidents Involving Syrian Refugees