This research seeks to help the U.S. Air Force (USAF) understand the implications for future operations in the Nevada Test and Training Range (NTTR) of Desert National Wildlife Refuge (DNWR) land that overlaps the NTTR. The USAF and the U.S. Fish and Wildlife Service (USFWS) co-manage this land, and some of it is proposed wilderness. The proposed wilderness designation can restrict some desired Air Force activities. 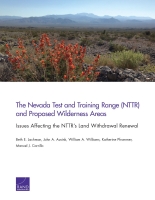 The testing and training available at the Nevada Test and Training Range (NTTR), in southern Nevada, is considered crucial to the survival of U.S. military personnel and to the success of their missions. As a Major Range and Test Facility Base (MRTFB), the NTTR also is a core element of Department of Defense (DoD) Test and Evaluation (T&E) infrastructure. 2.9 million acres of land have been withdrawn from public use for the NTTR, and the authorization for this withdrawal expires in November 2021. To renew the land withdrawal, the Air Force must submit a request to the Bureau of Land Management (BLM). A significant portion of the NTTR overlaps some land within the Desert National Wildlife Refuge that has been designated as proposed wilderness. This document provides background on the proposed wilderness designation; the limits that it places on Air Force training; and potential approaches to mitigating these limits that decision-makers should consider as part of, and even separately from, a strategy related to the renewal of the land-withdrawal authorization. The Air Force has several options for obtaining greater operational flexibility in the NTTR areas that are proposed as wilderness. All of these options would require working with the U.S. Fish and Wildlife Service (USFWS), and within official USFWS processes, to meet Air Force objectives.

The research reported here was commissioned by the Air Force Civil Engineer Center and conducted within the Manpower, Personnel, and Training Program of RAND Project AIR FORCE.